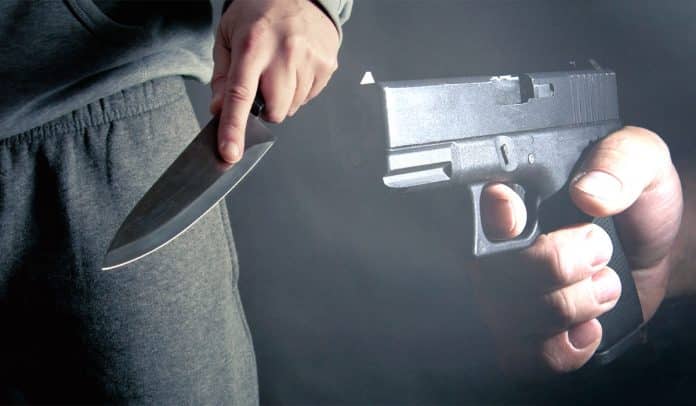 Many times, we read about these DGU or defensive gun use stories, and there aren’t many details. But we can still pull takeaways from stories like these. Or just prove points. Such as the old saying, “Don’t bring a knife to a gunfight.”

This past Wednesday, around 7:45 PM, in the Uptown area of New Orleans, LA, some men met to conduct a “transaction of purchase.” Reports only state that there was more than one man on the robbery’s side and one victim. One of the robbers pulled a knife on the victim. But as stated, he apparently brought a knife to a gunfight because the victim pulled a gun.

According to NOLA.com, he then ordered the robbers to leave, which they did. The police apprehended the robbers but did not release any names or how many they arrested.

So we don’t know what kind of “transaction of purchase” this was. It could have been a Craigslist transaction. Who knows. We also don’t know how many robbers there were. It could have been two on one, three on one, or more. What we do know is that one man was prepared to defend himself, and apparently, in this situation, the robbers got more than they bargained for. So while there were multiple robbers, the gun was the equalizer that night.

I scoured some of the comments on the NOLA.com Facebook Post (below) and found a few that were interesting, to say the least. Most of them echo what we said, “Don’t bring a knife to a gunfight.”

The thief got what was coming to him. We have the right to protect ourselves.

But then there was this one.

“Wondering what everybody’s responses would have been if this guy defending himself fired and killed an innocent bystander. What sort of “business” were they up to at 800 at night. What type of business or meeting would make one being a gun and another being a knife. This wasn’t a random mugging the article said they were meeting to do buisness. I am not for abolishing guns but I am for using them safely. The way I read this article it seems they were both up to no good and put the public at risk.”

So first off, the police withheld the name of the business, and there were no reports of the man with the gun being arrested. So I can only assume this wasn’t something shady. To me, it seems it could have been some type of Craigslist-type transaction, but we can’t know for sure. Also, Sunset was around 8:00 PM that night, and the reports say this happened at 7:45 PM. So this wasn’t done in the dark of night when most people are sleeping. And if you are a concealed carrier, why wouldn’t you carry a gun when meeting for a private transaction? I wrote an article back in 2016, Protecting Yourself In Private Sales: Concealed Carry And Face-to-Face Sales Tips, and tip number four is, you guessed it, make sure you carry concealed.

Police say a suspected robber pulled a knife. The victim then pulled a gun.