How to Break In a New Holster 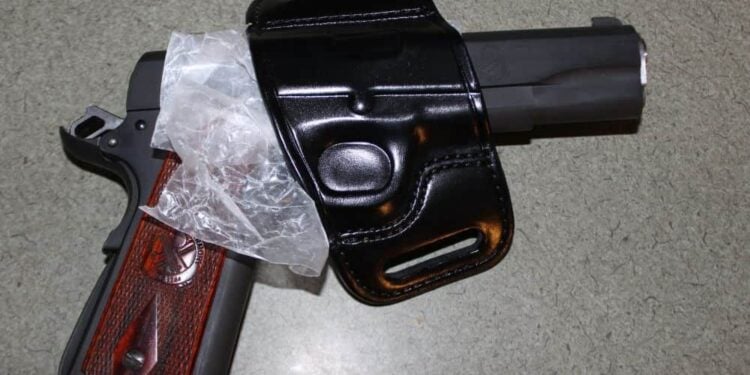 How to Break In a New Holster

I’m always in search of the “perfect” holster, which means I’ve literally accumulated an entire box of holsters (that’s overflowing) in my closet. The other day, I decided that the numerous 1911 holsters in the box wouldn’t work for me and I purchased an outside the waistband “belt slide” holster made of leather.

When I put my gun in this new holster it was so tight that it took me forever to get it out of the holster again. If I would have had to draw the gun at that time to save my life, I’d probably be six feet under at this moment instead of writing this article.

With new leather holsters, having the gun be extremely tight fitting isn’t uncommon and all you need to do is break it in. Oftentimes, if you draw the gun in and out of the holster multiple times that will loosen it up enough and you won’t have to do anything else.

However, with the new holster I just purchased, drawing the gun in and out did very little and the gun was still extremely difficult to draw.

If you find yourself in this position with a leather holster, another thing you can try and use is some type lubricant, such as the popular “Leather Lightning.” Leather Lightning is applied to the inside of a holster and essentially “greases” up the inside of the holster so the gun easily slides in and out.

I will tell you though, I’m not a huge fan of any of these types of lubricants and I didn’t use one on my new leather holster.

Instead, what I did, and what I would do if I were you, is I placed the gun in a plastic shopping bag (the kind you get from the grocery store) and then placed the gun in the holster. (See the picture below.) When you use this plastic bag, it helps to slightly loosen up the holster making it easier for you to draw the gun.

Leave the gun in the bag overnight and the next morning insert and remove the gun, with the plastic bag still on it, from the holster several times.

Most of the time, the plastic bag is all you need and by now it’ll be easy enough to draw your gun. However, in some cases the gun will still be too tight to get out of the holster.

If this is the case, the next thing you want to do is wrap the gun in some wax paper, which you probably have sitting in a drawer in your kitchen right now. Like with the plastic bag, leave the gun wrapped in wax paper in the holster overnight. Then in the morning draw the gun, still wrapped in wax paper, several times.

If you’ve used the plastic bag and wax paper and the gun still won’t easily come out of the holster, then try using a thicker plastic bag, such as a Ziploc type bag. If you leave your gun in a thicker bag overnight, this will most likely do the trick.

The bottom line is, if you get a new leather holster for Christmas and you can’t get the gun out of it, use the methods above to make sure the holster is safe for concealed carry.

Electronic Ear Muffs for Shooting: Some Criteria and Options