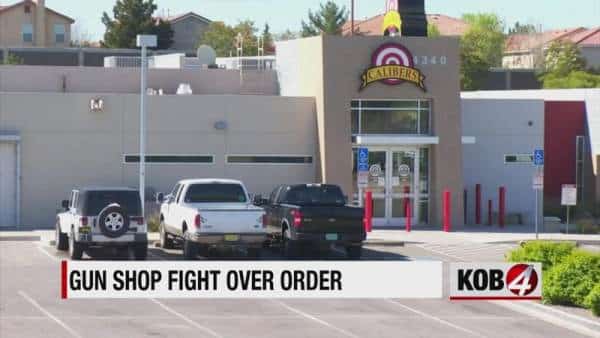 The owner of Calibers has decided to press New Mexico’s Governor and stated that he does not have the right to shut gun stores down. Calibers has now reopened with social distancing measures in place. He said in part:

“…we’re going to take this fight back to her. We feel that unless, somehow, she got a magical power to take the Second Amendment out of our constitution, that we have the right to open up.”

The NRA, along with other groups, is suing the State of New Mexico over the same Public Health Order that closed down gun stores.

“…while we as an administration unequivocally support the constitutional right to purchase a firearm, we recognize that right does not correspond to a right to congregate in a store and infect neighbors and workers and public safety officers amid an unprecedented global pandemic.“

It appears at first look that the Governor’s office doesn’t fully understand the definition of the word “unequivocally”. It would also seem to be obvious that Calibers is not asking for “…a right to congregate in a store and infect neighbors and workers and public safety officers…”

Yes, words mean things and this shop owner has decided it’s time to challenge his Governor’s decisions in this case. Sometimes the only way to protect your rights and effect change is to take the fight to the courts.

Something else that means something are elections. It’s easily arguable that a candidate’s belief system and world view is much more important than their stand on specific issues of the day. We never really know what our public officials might have to deal with during their time in office. It should be painfully obvious by now that we must only elect people of the highest levels of integrity and character that actually intend to carry out their Oath of Office to uphold and defend their State and our Federal Constitutions as they were written.