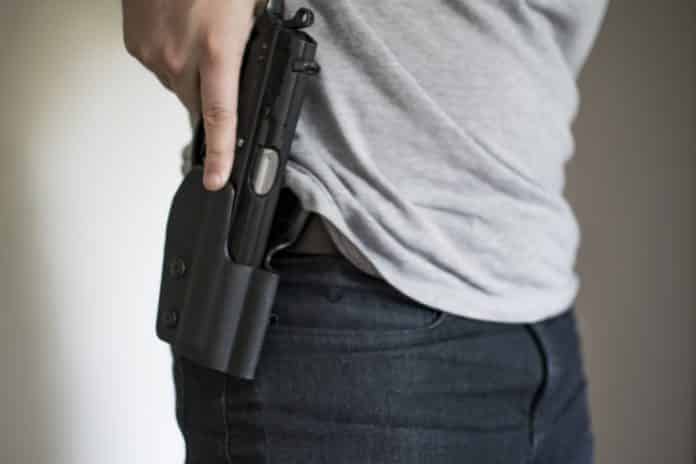 When you get home after a long day at work, if you’re anything like me – you take your concealed carry pistol and holster out and put them in a safe place.  Who wants to walk around the house with a pistol on?  Surely – if you can’t relax at home, where can you?

Did you know that the biggest chance you have of ever needing to use that pistol is probably within the radius of your home?

In 26.7% of home invasions, the victim was home at the time.  Just about a quarter of those burglaries resulted in violence (26%) against the victim.  So a quarter of a quarter is a very small amount — but still significant.  (Source: Victimization During Household Burglary, Bureau of Justice Statistics, pg 1, 2003-2007)

And despite what you may think, it’s not always in the early morning hours.  Home invasions can occur at any hour in the day.  Intruders will be looking for the most opportune time to break in with little resistance – but that gives them the choice.  One of the things about being on the offensive side of operations is you get to choose the hour and manner of your attack.  It’s the defender’s job to be prepared at any hour.

For single females, they experience the highest rate of being home during an unlawful entry – on average 22.6/1,000 households.  (Source: Victimization During Household Burglary, Bureau of Justice Statistics, pg 3, 2003-2007)

And above all – you’re more likely to know the person that’s burglarizing your home than it to be done by a total stranger.

“On average, household members became victims of violent crimes in about 266,560 burglaries annually. Offenders known to their victims accounted for 65% of these burglaries; strangers accounted for 28%.”

Okay, so we’ve established that being armed at home is probably a good idea.  Because nobody has come up with the magic algorithm to determine whose house is next for a burglary, preparedness at the home isn’t the worst solution.

This gets more complicated in households with small children and a need to secure firearms.  Obviously, when your three-year-old comes running up to you, you’d rather direct your attention thataway.  And it’s not exactly like you can leave your firearm resting on the coffee table while you both settle down to watch some children’s cartoons.

The best method for situations like this is to simply keep the concealed carry firearm in its high-retention holster.  This enables you to go about your daily routines – cooking, cleaning, family time – without worrying about the security of your firearm.

Click here for the top 5 firearms for home defense.

And what about for couple’s night?  On the occasion you get to just eat a meal in peace with your significant other, you’re probably not interested in keeping your firearm attached to your hip the entire time.

Okay, and let’s discuss game day.  Buddies are over and there’s a 6-pack out while you watch the New England Patriots get stomped by the Miami Dolphins.  Alcohol and firearms don’t mix – so what now?

There comes a trade-off at some point.

You have to determine that trade-off.

Whether it’s being responsible and putting the firearm in a safe or keeping it attached to your hip the whole time – you have a multitude of options.  The basics are always this:

Ultimately, you’re in charge of your household.  No matter if you’re a single mother just trying to keep safe in her apartment or a guy with roommates or the head of a household of a significant other and two children — you have to find the perfect balance of security and relaxation at home.