Carrying a Pistol with No Belt: The Brave New World of Concealed Carry

by Salvatore
in Articles, Concealed Carry
2 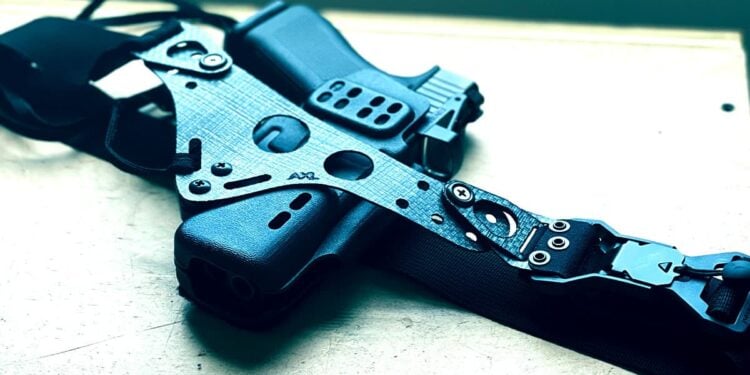 For decades there has been a dedicated industry of manufacturers who make gun belts. These belts are specifically designed to accommodate belt holster carry of pistols. Traditionally, if you carry a gun on the waistline, you do so with a good gun belt and holster. It appears that this is no longer mandatory.

First, let me say I don’t think the gun belt companies will be going out of business. I am a firm practitioner of belt carry as my preferred method for carrying a handgun, and I know many, probably most, concealed carriers agree. However, in our contemporary lifestyle, there are many instances where carrying in a traditional belt-based manner may not be possible. When you go to the gym in only draw-string shorts, how do you belt carry? When dressed formally with a tucked-in shirt, belt carry may not be an option. Thus, a new breed of concealment accessories has emerged in the past few years to address this challenge.

My own concealed carry practices have changed over the more than two decades of gun-carrying that I have done. When I started, it was a full-size 1911 government model on strong-side hip. Today I carry a Glock inside-the-waistband in the appendix position. There have been a few variations in between. Generally, though, these standard forms of carry utilize a gun belt. For quite a few years now, I have also taken advantage of secondary modes of carry to accommodate either very casual dress (gym shorts) or very formal dress (tucked shirts and dress pants). I used ankle carry for several years to conceal on the infrequent occasion that demanded I dress formally. However, several years ago, I phased out ankle carry for this role once I discovered the more modern belly band options incorporating kydex holsters into the band. This approach, and some contemporary adaptations, have been game-changers.

For quite some time, there have been some “tuck-able holsters” on the market. The problem I always have with these options is that they still require clips of some sort to keep the holster attached to the belt. No matter how discreet the design, the clips remain visible. Once I found a belly band that worked, I found I could carry a small handgun under trucked shirts in a manner that exposed absolutely no sign of a concealed pistol. This option allows me to carry in my usual body location on the waistline. It simply demands a different draw stroke as the shirt must be pulled out of the pants rather than just be lifted.

The reality is, at this point, even people who don’t wear belts regularly can carry their gun on the waistline. The traditional belly band has been around a long time, but the downside has always been that most are designed to be universal-fit options with only a sewn-in elastic holster pocket. While somewhat functional, this solution always left a lot to be desired. The elastic pocket in these belly bands can actually carry a pistol, but the draw was always compromised, and safe re-holstering was, essentially, impossible. Still, this solution was put to use for many people over the years as it was one of the few viable deep-concealment options.

In the past few years, a new breed of belly bands has emerged that utilizes an elastic band to hug the body but provides attachable kydex holsters that are gun specific. This proves a far better solution for deep concealment as it is a more secure means of carrying the gun than is only the sewn-in pockets on traditional bands, and it also facilitates safe re-holstering. Two examples of this that come to mind are the CrossBreed Modular Belly Band and the Unity Tactical Clutch Belt. The CrossBreed option sells matching holster shells for a variety of guns that go along with the band itself. The Unity Tactical option allows you to affix a wide variety of kydex holsters from any other manufacturer. These options can be very concealable, just depending on how much gear you affix to them. The reality is, though, that a substantial concealed toolset can be carried on these solutions and still disappear under tucked shirts.

There are other products that have recently emerged on the market to specifically facilitate carrying a gun in deep concealment, on the waistband, without a belt. The most notable recent release is probably the Phlster Enigma (this is the holster in the main photo), a device that allows you to affix a kydex holster shell to a molded piece of material that is held on the body with a strap. This design is built to securely hold full-size guns yet do so in a very concealed manner under any kind of clothing. This device allows for a multitude of adjustments for cant and ride height, and it also accommodates the use of a wedge on a holster, a device that draws the grip of the gun tight into the body to aid concealment.

So, with such offerings on the market, is belt carry dead? Obviously not. I can tell you that many people, particularly men, prefer wearing a belt daily anyway, myself included, and the optimal means of carrying a gun remains a good holster on the belt. However, these new concealment products now make it possible to carry a gun in the same body location that you are used to with belt carry, but at times you can’t wear a belt, or when you need to tuck your shirt in. This is an excellent new ability.

I would submit that these new products may lead many concealed carriers to phase out off-body or ankle carry options as their deep concealment methods. I used ankle carry for a while, but I moved to belly bands once I got one that was better than the standard nylon pocket holster option. Even here, there will continue to be a need for ankle holsters as some people simply prefer this concealment mode, such as people who spend a lot of time driving. Ankle carry will still be a great option for carrying backup guns, but it need not be the sole option for deep concealment in formal dress going forward.

So, while traditional means of carrying guns will remain, the option to actually wear a capable handgun without needing to affix it to a belt is a fantastic innovation that many concealed carriers can benefit from. Being able to go armed, even when not dressed for it, is a good thing.

Colorado Homeowner Shoots Man After Confrontation In His Home

The one in the picture – what is it? Please give us a caption or a link to THAT product. We shouldn’t have to guess.

It is the Phlster Enigma.