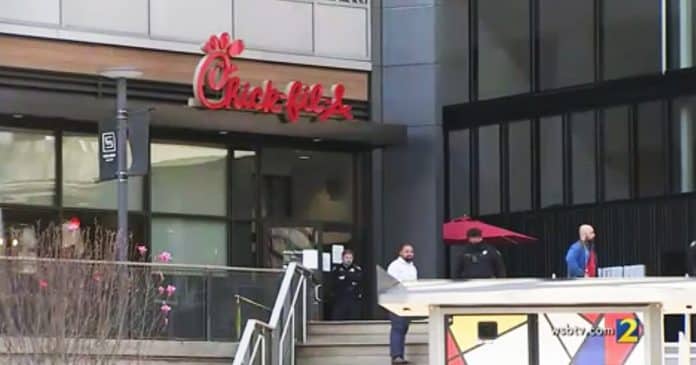 Things got a little exciting at an Atlanta Chick-Fil-A about 3:00 PM when an armed man entered the store and demanded cash.

As the suspect ran from the store, several witnesses tried to stop him but one man pulled his gun and fired two shots. He didn’t hit the suspect but was able to hold him for police. No one else was injured and no charges are expected against the man who fired the shots.

The suspect was charged with several felonies.

While it’s always great to see a good guy stop a crime, there is always a risk, both physical and legal, in doing so. Attempting to stop an armed suspect that is fleeing the scene of the crime is dangerous. Police are the only ones with the authority to pursue bad guys so unless the suspect is posing an imminent threat to someone it’s usually best to let them go and let the police do their jobs.

This good guy fired two shots at the suspect but didn’t hit him with either. Where did those shots go? How would the good guy be viewed (and possibly prosecuted) if either or both of those shots had hit an innocent person?

If your life is not personally being threatened, you have to ask yourself is what I’m about to do worth the risks involved.