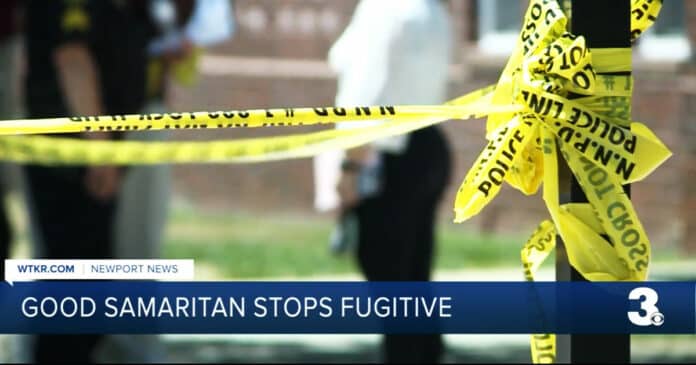 Deston Coward, 22, is being charged with attempted capital murder, among other charges, after engaging in a gunfight with Newport News Police.

Coward, from Yorktown, VA, was wanted by police due to warrants involving probation, grand larceny, as well as assault on a police officer.

Officers attempted to serve the fugitive with said outstanding warrants in an apartment complex before he fled through the Port Warwick area. During the foot chase is when Coward fired at officers who returned fire.

Coward ran toward the area’s embankment and encountered a good samaritan who confronted and detained him shortly before police arrived. The man who halted Coward is also a concealed carry permit holder. Newport News Police Chief Steve Drew emphasized that the man, unidentified, was a good samaritan due to the fugitive being considered “armed and dangerous.” Chief Drew also stated no one was shot or injured.

“He was able to hold him and detain him for a brief second as officers made it up the embankment and took Mr. Coward into custody,” Chief Drew said. “I really want to thank the young man that did engage him and assisted the police today. He did an amazing job.” via WTKR.

If you are in a similar situation, it would be best to avoid it in any way possible. It is not known if the good samaritan was either in the right place at the right time or if he chased down the fugitive himself. It is also unclear if he drew his concealed carry gun or just physically detained Coward. Thankfully, no one was hurt, and the chase came to a plausible end.

When engaging physically in a self-defense situation, especially as a concealed carrier, it is best to make sure your weapon is, first of all, best safeguarded from others’ access. You definitely take a risk especially engaging an armed suspect face-to-face. Still, this shows that along with concealed carrying, individuals that do so should also learn some form of hand-to-hand skills.

The good samaritan in this incident risked his own life. That’s something each, and every concealed carrier needs to decide before walking out the front door. Who are you willing to defend and protect? Yourself? Family? Friends? Complete strangers?