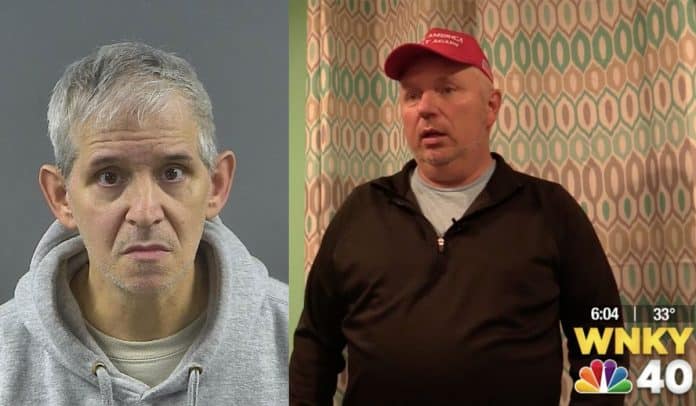 It is often said that concealed carrier as some of the most law-abiding citizens. If you are going to take the time to obtain a firearm legally and go through the process of obtaining a concealed carry permit or license (with the exception of those that reside in Constitutional Carry states), then you are most likely someone that obeys laws.

That being said, there’s always an exception to the rule. And while we hate reading news reports like this, it does happen from time to time. Carrying a firearm brings on a lot of responsibility. You need to have self-control and not let yourself get triggered by other peoples actions. We’ve covered this in past articles such as, “How To Handle Stress While Carrying A Concealed Handgun.”

On Saturday, February 16, 2019, a husband and wife were shopping in Sam’s Club and both were wearing MAGA hats. For the people that have been living under a rock, MAGA is the abbreviation for the slogan used by President Trump during his presidential campaign, “Make American Great Again.”

James Phillips, who had a Tennessee Concealed Carry Permit, decided it was a good idea to flip the couple off. He apparently wasn’t a Trump supporter. The husband then asked, “Hey, did you just flip me off?” Philips said yes, the reason being that they had MAGA hats on.

After reading numerous news reports, this is where the incident escalated. Philips allegedly drew his .40 S&W handgun, stuck it to the husband’s face and said, “This is a good day for you to die.”

What happened next is where we would have to disagree with the victim as it seems that he escalated the incident. He challenged Philips to either shoot him or fight him. This probably wasn’t the best way to respond to this situation. Apparently, Philips holstered his pistol and left with his mother.

At this point, it seems that the incident could have been over. But the husband and wife followed Philips into the parking lot and continued the argument. Philips accused the husband of assault but there was no camera evidence to back his claim. There was also no camera evidence of Philips pulling his gun as he had walked out of view of the camera.

The incident ended with Philips being arrested and pleading non-guilty to first-degree wanton endangerment.

What can we learn from this incident?

1. Again, don’t let yourself get triggered by other people’s actions. Whether you are for or against Trump, someone simply wearing a MAGA hat should not set you off to the point of flipping someone the middle finger which is what started this confrontation. Simply go about your business. We should all simply respect everyone’s political views regardless of who you are for or against.

2. On the flip side, if you notice someone flipping you off, the best option would be to simply try to de-escalate the situation. Maybe just head to a different section of the store instead of confronting the person. I’m not saying you should completely turn your back on the person as you need to keep your situational awareness in case things go south. But confronting them will most likely just give this person what they are looking for and cause the confrontation to escalate.

3. Once an incident has been de-escalated, don’t re-escalate it. In this case, the couple followed the man that drew his gun into the parking lot to continue the argument. Bad decision. At this point, just wait for the police to arrive. The man already drew his pistol once, why follow him to the parking lot? Who knows what he would do next. He obviously cannot control himself so why push him even further?