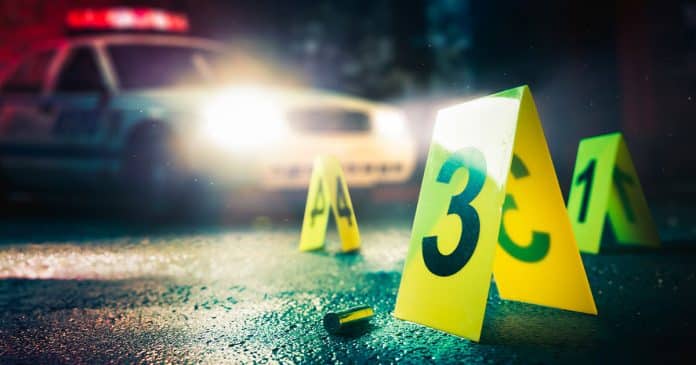 A birthday party was happening in the basement of a West Side, Chicago apartment. About 2:00 AM, an argument started between one of those in the basement and someone outside in the yard.

A seven-time convicted felon (along with a list of misdemeanor convictions) who lived in the building took offense at the group outside and told them to leave. But before anyone could go, he pulled a gun and fired 7 to 10 shots into the crowd. A licensed concealed carrier, who was hit by the gunfire, returned fire and reportedly hit the shooter twice. He later died at a hospital. He likely saved others’ lives by his actions as police found the shooter down in critical condition with his gun lying next to him.

In all, two are dead, with three others wounded.

Interestingly, the suspect was out on electronic monitoring for a prior gun charge at the time of the shooting. This man had at least eight crimes on his record that prohibited him from owning a gun, yet here were two dead and three wounded by gunfire at his hand. I’ll let you decide the effectiveness of Chicago’s gun control laws and the judicial system that allowed him to be out in public.

It appears that the concealed carrier was likely hit before he had any time to respond to the gunfire, but this does illustrate again the fact that just because you are shot, that doesn’t mean you are out of the fight.

How do you defend against this sort of attack? Don’t be there. What I mean is that we all need not just to judge our current situation but also that we need to evaluate those we chose to be around and what time we chose to be with them.

Remember, nothing good happens at 2:00 AM, and don’t hang out with people and in places where there is a chance that bad things might happen. I don’t imagine that anyone there expected this to happen but learning to stay safe is partly about knowing to expect the unexpected.