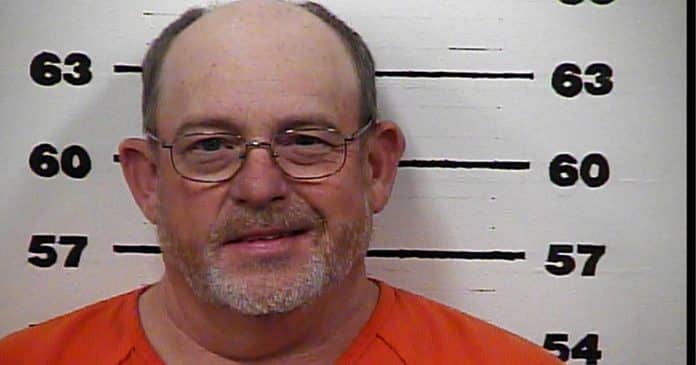 On a Sunday morning earlier this month, a Tennessee. man and his wife were awakened by their chickens making noise outside their home. Stepping outside he saw his neighbor’s dog chasing his chickens. He then fired a pistol into the ground three times to scare off the dog. It was then that he heard another dog in his chicken coop so he fired three more times which caused the second dog to run out of the yard.

At this point, the man puts his gun away and starts heading toward the neighbor’s house across the street. About the time he gets to the road, the neighbor pulls up in his truck and gets out with a shotgun in his hand. The man claimed the neighbor pointed the gun at him and his wife and said he would shoot them if he had shot his dogs.

An argument ensues about the dogs but the first man soon attempts to de-escalate the situation. The neighbor eventually leaves after allegedly saying that he had no problem “taking care of [him]” according to WJHL.

The first man told Sheriff’s Deputies that he got his family together and left out of fear for their lives. The neighbor was later arrested and charged with aggravated assault and reckless endangerment with a firearm.

As he should have been.

Now shooting your pistol to scare away nuisance dogs is not a great move and perhaps it was those shots that drew the neighbor’s attention and that provoked him to threaten to shoot the man and his wife if he had shot his dogs. Nevermind the issues that could cause with city governments for discharging a firearm within city limits. Since this was a more rural area perhaps that wasn’t an issue here.

But threatening someone with a shotgun over a pair of dogs is always a criminal act. Even if the man had shot the dogs that’s no justification to threaten deadly force with a firearm.

The man’s attempts to de-escalate the situation, he being the one to call authorities and then leaving the home claiming fear of the neighbor all lend credibility to his statement to deputies.

Perhaps the threat and possibly the reality of an extended stay in prison and the loss of his Second Amendment rights will convince the dog owner to be a better neighbor.

Irresponsible dog owners are the bane of many a community. It seems there is no way to escape them. I have lived in the city, in the suburbs and FAR out in the boonies, off grid. One constant is disrespectful neighbors with non-stop barking dogs or loose dogs that stray and get into mischief.

I need to buy an island somewhere. But then some a-hole would probably anchor his sailboat right off shore of me and let his dog bark and howl all night.

I would have shot the dogs and held the neighbor liable for any dead chickens. Here in Tennessee, in the rural areas, you can shoot in your yard as long as you are not shooting at your neighbors. I would not have gone to the dog owners house.
I would have let him come to me and see where his dogs were in my yard and then told him that he would have to pay for any dead or injured chickens. And if he would have come to my house with his gun, then I would have called the police.