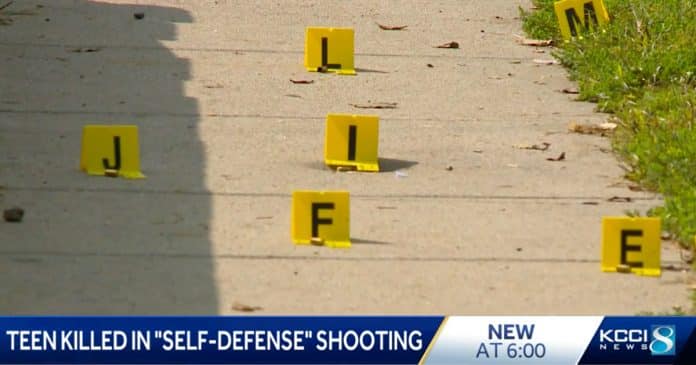 This one happened very early in the morning, about 5:45 AM in Des Moines, IA.

Two armed 16-year-old males approached a man and demanded that he empty his pockets. Instead, the victim drew his own weapon and shot both suspects. One died, but the other was taken to a hospital and is expected to survive.

The victim, a concealed carry permit holder, called police to report that he had been approached by two armed teenagers trying to rob him, and he shot them in self-defense.

The Des Moines Police Department said no charges would be filed according to KCCI 8. Of course, that’s not the Police Department’s call; that’s up to the county attorney’s office, but this one looks pretty straightforward.

Sadly, criminals think that they can quickly get away with armed robbery like this, but even more so when it’s young teenagers. I can’t speak for these teens, of course, but the common thought is that they don’t really intend to shoot anyone; the gun is being used to intimidate the victim into compliance and maybe to have just in case.

From the victim’s perspective, though, it’s impossible to know the motive behind the attacker(s), and the law doesn’t require us to place ourselves at their mercy. If an attacker is threatening deadly force, we are permitted to take that threat at face value and act to defend ourselves.

I will always say that drawing when a gun is already out is a risky move, but we don’t know the circumstances for this one. Maybe the suspects just revealed that they had them (detectives determined that both suspects had handguns), so the victim had time to react. Perhaps there was some cover the victim took advantage of. Maybe the suspects were so surprised by the victim’s own gun that they couldn’t react fast enough.

However, it actually when down; this victim was able to win the fight. Just how fast can you get your gun out and get shots on two separate targets? Knowing this may very well determine how you might react if in a similar situation.

When presented/threatened with “Deadly Force”, it is not unreasonable to respond “In Kind”. One has no idea what the Perpetrator’s Intents “might” be.