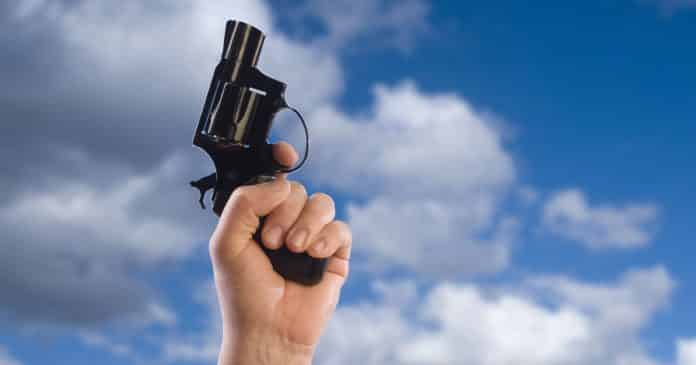 An elderly Santa Clarita woman called 911 about 2:00 PM on a Thursday to report that a man that she didn’t know was trying to gain entry into her home. Moments after she contacted 911 operators, the man entered the home. The woman had locked herself in a room, but the suspect forced his way into where she was.

That’s when he discovered that she had a gun. She told the man to leave, and he complied. After he left the home, though, the woman fired one shot into the air and told him to get on the ground. Again, the 29-year-old man complied, and that’s where police found him when they arrived. He was arrested on felony burglary charges.

This is yet another of those cases that are a horrible example for others to learn from. But just because the outcome was good doesn’t mean anyone should follow the example.

First of all and again, never, ever, ever fire a warning shot, ever! And never try to “hold” a suspect for police. That is essentially a “citizen’s arrest,” and there are way too many physical and legal risks involved. If the attacker is leaving, let them go.

Up to the point of the warning shot, this woman did it right. Locked door, called 911, retreated to a locked room in the home (which removes any legal ambiguity about the intruder’s intentions) and only threatened deadly force when the intruder broke into her room.

But as can so quickly happen, fear for your life turns into anger, and a “how dare you” attitude once the threat begins to flee and the victim now believes that they have the upper hand in the attack. If the victim begins to pursue the former attacker, they can now be considered the attacker in an entirely new fight. Not the place you want to be.

This woman’s actions could lead to charges for discharging a firearm within city limits, reckless endangerment, or even as bad as attempted murder, depending on the jurisdiction.

My guess is that being an elderly woman and since no one was hurt, she’ll get a pass. You may not.