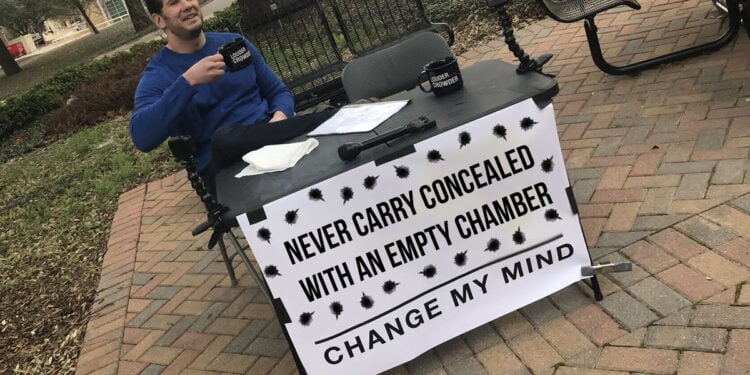 Just the other day, I was talking with a good friend that carries, and he mentioned that he carries his Glock 43 with an empty chamber. I was pretty surprised when he said this. He mentioned that he has kids in his house and didn’t want them getting a hold of a loaded pistol. My reply to that was to lock the gun up or put it out of the children’s reach. When I am home, the pistol I am carrying that day is usually on me. If I need to take it off for some reason and still want quick access, I’ll put it in my GunVault next to my nightstand.

I don’t recommend putting in places like “on top of the fridge.” Kids do what kids do and can get into everything. My three-year-old is getting into everything and climbing on everything. While the “top of the fridge” may seem like it is out of the way, there’s still a chance a kid can get to it. Without going into it more since we’ve covered the kids and guns topic already, I want to say one last thing. You need to make sure you teach your children about what to do when they find a gun. For more information, check out the NRA’s Eddie the Eagle Program.

But my friend didn’t just carry with an empty chamber at home. He also carries with an empty chamber when carrying concealed in public! The reasoning for this didn’t have anything to do with kids. He just figured he would have enough time to chamber a round if were to draw his pistol in a self-defense situation.

He didn’t want to hear any of my reasoning for why this is an utterly bad idea. So when I got home, I started looking for videos I could send him to help back up my points.

I found some excellent videos to send him, but instead, I decided to write this article to possibly help convince other’s out there to start carrying with a round in the chamber.

The first two are from Active Self Protection which is a YouTube channel ran by John Correia that does after-action reports on real-life self-defense situations caught on tape. It can be disturbing as many times the good guys don’t win, but we can learn a lot from them.

First up, is a compilation that shows a few different scenarios that back up the points I made before.

This second video shows a store owner waiting for his window of opportunity to draw his weapon while being rubbed but the criminal gets his shot off first.

Here is video from Caleb Giddings from Gun Nuts Media that compares drawing from a holster and putting shots on target to drawing from a holster, racking the chamber and then putting shots on target. He concludes that you could be giving away a 1/2 second when having to chamber a round. Doesn’t seem like much, right? Well, he also shows that you can get off three shots in about 1/2 second. Why would you give away three aimed rounds?