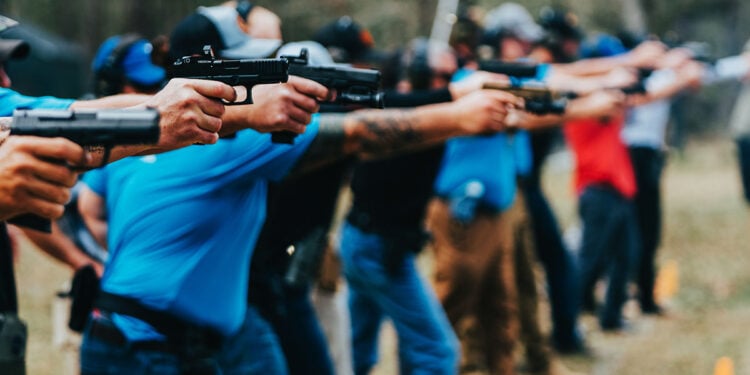 As a perpetual student of this craft, I often consider what defensive pistol skills are, indeed, necessary, for the armed citizen to prevail in the face of most violent encounters. The reality remains that those of us who think about this stuff, teach it, write about it, and often train in it, are enthusiasts who quickly lose perspective on what the average concealed carrier thinks regarding the subject. The common concealed carrier or common American gun owner spends little time considering the threat of human predation or their own response to it. This is, certainly, not surprising. Human beings tend to block out of mind what is scary. How often do people consider the threat of fire, automobile accidents, or the far more common killer than any external factor, heart disease? We don’t dwell on what scares us.

So, when considering what skills are needed for the non-enthusiast who will spend little, if any, time thinking about or training for violence, what skills should we urge them to prioritize? I would argue that most are best served by beginning with learning basic trauma care and first aid, and then learning the particulars of self-defense law before they even begin down the road of training with a handgun. However, pertaining to the use of a defensive pistol, the following is my suggested list of priorities for the non-enthusiast:

While not a tangible skill that can really be taught, if you wish to influence a family member, friend, or acquaintance towards something beneficial, try to encourage them to embrace the needed mindset. This mindset begins with simply the acknowledgment that “it can happen to me.” The single greatest obstacle that most people face is self-induced; a failure to accept that violence can touch them, personally. How many times have you raised the subject with somebody who responds by declaring that they “live in a nice neighborhood, so they don’t worry about it.” Such willful denial of reality is the foremost roadblock for most. The sheer acceptance that the individual must be responsible for their own safety is the beginning and foundation of all further mindset development. This proves, indeed, the most difficult obstacle to overcome for the average person concerning self-defense.

Pertaining to skills development, the foremost priority must be safe gun handling. A firearm does the owner little good if it becomes a detriment rather than an asset. Before we can even consider what shooting skills are necessary, we must ensure that we impart a solid base in firearms safety to anyone we mentor. The reality remains that the majority of gun handling anyone will do in their lifetime is administrative in nature. Safe gun handling, so that the rules of firearms safety are well engrained and the people of the household are safe, is the top priority for all gun owners.

Most gun owners don’t carry, and even those who do must, or should, store the gun when home during the hours of sleep. The abundance of modern, fast, and affordable hand safes has made the practice of leaving guns laying on nightstands dangerous and obsolete. Part of the necessary defensive skillset is the ability to safely store defensive guns and safely and quickly deploy them. When I demonstrate basic firearms safety and gun handling I typically include the demonstration of using a small hand safe to contain the firearm when it is not on body, and how to quickly and safely bring the gun into action from the safe, if necessary.

Safe Movement with a Gun in Hand

One element of firearms training that I find is often neglected in basic classes is movement with a gun in hand. I have seen a number of firearms classes where ready positions are not even covered. The fact remains that the vast majority of defensive gun uses end with no shots being fired. If a gun must come out in a defensive situation it is greatly important that the user knows how to handle it safely in a stressful situation. Ready positions and movement that does not flag innocent people with the muzzle of the gun is needed, as well as strict finger discipline. This entire category of defensive pistol craft is a top priority and should be taught from the very beginning of an individual’s training journey.

If the gun is needed, it must be drawn. A foremost skill to be developed is a safe and efficient draw stroke. This tends to be a skill that is most challenging for concealed carriers as clearing a cover garment and deploying a concealed handgun is challenging. No other shooting skills will matter if the gun is not deployed efficiently when needed. The draw must not only be efficient and fast, but it must be safe. Most concealed carriers don’t practice their draw stroke to the point of competency and most never learn proper technique from the beginning. This is, potentially, the single most important part of the defensive pistol skillset for the individual to develop, yet it is lacking among the majority of concealed carriers.

Finally, the ability to make hits is greatly important as solid hits end fights, and also ensures that stray rounds don’t fly around in public locations. The truth is, most defensive shootings are not difficult marksmanship problems as they happen at close range. All of the additional thinking skills required for the utilization of good tactics are more demanding, but a focus on the needed marksmanship skills for landing fight-ending hits within these common ranges should be taught, and the defensive gun owner or concealed carrier should continue a routine of practice to preserve and build this skill.

You may find that this suggested list of priorities is not what is commonly taught in training that focuses entirely on physical execution of shooting skills, but these elements, I would argue, are the most important.