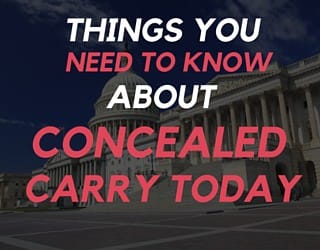 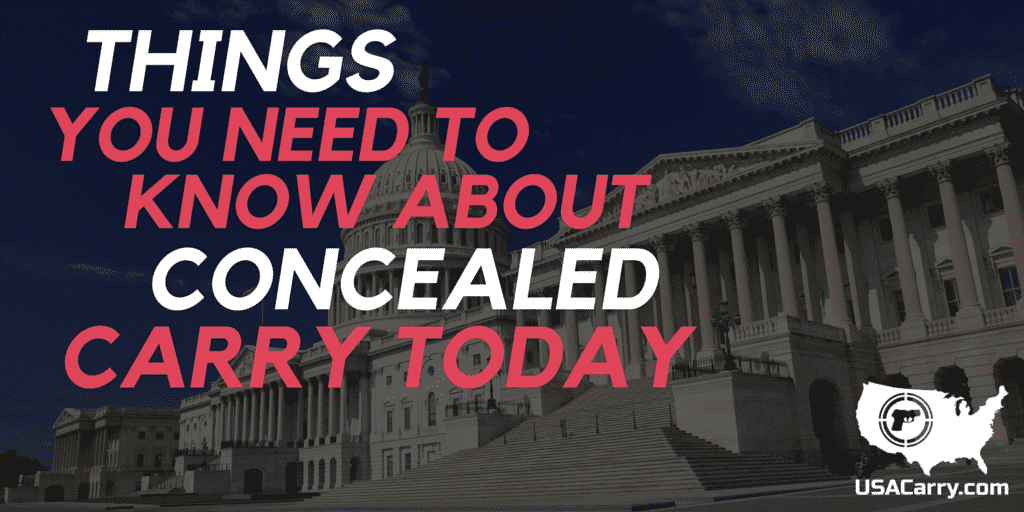 For the last couple of decades, the world of concealed carry has been filled with news about changes in permitting, registration, laws, and reciprocity. The latter is the most common point of media interest, as CCW laws between states have gone from a bewildering nationwide patchwork quilt to a rather more comfortable system of mutual reciprocity. Currently, the right permit will get your right to CCW recognized in 30-plus states, which makes travel and vacationing a lot easier for those of us in the concealed carry life.

Things are changing yet again. Up till now, CCW laws and reciprocity were established as agreements between the several states. Now, however, there’s a move toward nationwide recognition of CCW permits, possibly mandated by the federal government. This is happening on several fronts; there’s proposed legislation in place to make nationwide concealed carry a reality, while other folks are arguing that recent Supreme Court decisions have already opened that door. This is by necessity a complex issue, and there are many things to consider.

First, let’s address some basics. As it stands, there are a number of different pieces of legislation in play, in both the House and the Senate, advocating for various forms of nationwide recognition. While they are mostly aimed in the same direction: nationwide recognition of concealed carry permits by states which do not prohibit concealed carry, they vary widely in the particulars. ID requirements, and how the firearm may be transported. These are mostly superficial, but they do muddy the waters. Any federal legislation is going to have to stem from one bill, passing both the Senate and the House and potentially avoiding a presidential veto.

That’s a lot of folks to bring into agreement on an issue. And herding those cats is legendarily difficult.

And as those of you who follow the links have noticed, none of this legislation (mostly introduced in the first half of 2015) seems to have gotten very far in Congress. And from a brutally realpolitik point of view, that’s not surprising. While a majority of Americans do seem to support both the 2nd Amendment and concealed carry, it’s a contentious issue that leaves a lot of folks wary or uncomfortable. Winning them over and showing them the positives of gun ownership is going to take a lot of work, and we all need to pitch in if we want to see our rights preserved.

However, that takes us away from the concealed carry question-at-hand. Things got even more complicated recently with possibly the most contentious Presidential candidate in the race voicing his support for both the 2nd Amendment and a comprehensive nationwide CCW permit. This is a sweeping change from what we’ve heard from either mainstream party before, and one that bears consideration. While I support the 2nd Amendment wholeheartedly, I’ll close with some thoughts about a federally mandated nationwide CCW permit: thus far, CCW reciprocity has been a state to state movement with grassroots support. By letting the feds mandate a nationwide permit, we not only remove the rights of the states but invest the power to regulate concealed carry in Washington, D.C. As the political winds shift, this may come back to haunt us, and thus any such legislation should be very carefully considered.

As always, these are just my thoughts and I welcome input from the assembled. So until then, shoot straight and stay safe out there.

We don’t have a federal drivers license. Having a federal permit is the wrong direction and has clear and obvious drawbacks.
All we need is a mandate that state-issued CCW licenses must be honored in all 50 states and territories, just as drivers licenses are. Done!

You may think that making money by watching videos is impossible or boring but it can be very profitable. Most of the programs have multi-earning capabilities that allow you to take surveys, play games and complete offers, in addition to watching videos. Check out these programs for ways to earn some easy cash!

That’s all they did for gay marriage.

The problem would be for residents of states (like N.J.) which refuse to grant CCW to their residents — in that case these people can never conceal carry anywhwere. There are about 10 of these states where in theory you can get CCW but in practice you can’t.

With a National CCW ALL states would be forced to recognize and honor from ALL other states.

The drivers license comparison is not appropriate. Drivers licenses are a ‘privilege’. Owning and carrying a weapon is a 2nd AM ‘right’. A big difference. Which leads to another factor. The 2nd AM giving the ‘right’ being at the federal level — would stand to reason that the license for CCW derived from this federal ‘right’ would also be issued from the federal level to support (the ‘right’).

Hello. I’m new here and looking for information. So if I posted my question in the wrong place please “politely” let me know where to ask.

I found a gun in the attic of my new home in North Carolina. A Jennings 22 J-22 handgun. I’m outside city limits so I called for a deputy to visit. I know most would have kept it but I do own a carry/conceal permit issued in Indiana. And I do have the worst luck. My luck would be to keep the gun and use it only to find its stolen or used in a crime.

The deputy came, ran the gun and it’s not stolen or a wanted weapon. He handed me back the gun and told me I could keep it. That’s it. 20 minutes – not the 30 day hold I was expecting. But here is where I’m now confused:

Question 1 – I showed him my INDIANA lifetime permit (no expiration date). Even though I am now a resident of NORTH CAROLINA the deputy stated this permit from Indiana is good to carry and conceal on North Carolina. Is this true? I thought because I’m now a NC resident I needed to go through all the NC steps to have one in NC.

Question 2 – if he is correct and I don’t need to obtain a NC permit as a resident, doesn’t the Indiana issued permit need to have my new NC address on it? Currently it has the old Indiana address.

Question 3 – And if so, will Indiana void my permit because I’m no longer a resident? Ultimately requiring me to obtain a NC permit?

I just want to be legal in NC. But if I don’t have to jump through all the NC hoops to have a legal permit since I already did so in Indiana – that would be great!!

1 . yes it is honored in NC
2 . you may need to update your address as not it will be a non resident permit from Indiana
3 . your permit will be good in Indiana if it is the life time permit.

Note, your permit should reflect the same address as your ID. no matter which state you choose.

Thank you so much!! I will call Indiana state police today!!

It depends if Indiana issues non-resident cc permits. NC recognizes non-resident permits from some states, but the permit has to have your current address on it.