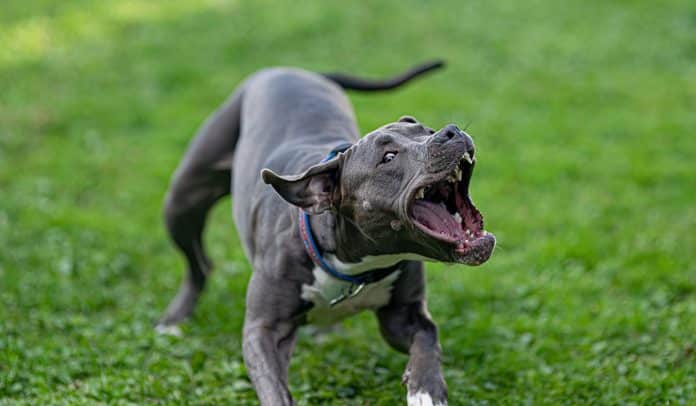 A couple walking their two dogs past a neighbor’s home who had just that day acquired a 3-year-old Pit Bull off of Craig’s List was attacked by that dog. The couple did their best to stop the attack, even using some form of a stun gun, but they were unsuccessful in getting the Pit Bull to give up.

Eventually, they resorted to shooting the dog which died at the scene. The Pit Bull’s owner said he wasn’t aware of any behavior issues when he purchased the dog. He also didn’t blame the neighbors and said he would have done the same thing.

There was no word as to the extent of any injuries to the couple or their dogs and also no indications as to any charges against either the Pit Bull owner or the couple.

Dog attacks can be very frightening, especially against something like a mature Pit Bull. Whether or not they justify the use of deadly force depends on whether the attack is against humans or just their pets.

This couple was walking their two dogs and dog attacks are commonly triggered by and are really against other dogs. Trying to stop the attack with some kind of electronic stun device is a good first move but going to the gun, especially in a neighborhood, is not legally justified. I’m sorry, don’t shoot the messenger, but dogs are considered property by the law and deadly force is not legal to defend property. Of course, charges would be up to the local prosecutor.

The other issue with going to a gun in a dog attack is that dogs are relatively small, fast-moving objects. Even once the dog has attached itself to another dog it’s not going to hold still. If you are able to get a good hold on it and attempt a very close or even a contact shot, there is the danger of over penetration and potential ricochet off of normal street pavement.

Since there was no mention of injuries to the couple (I think that likely would have been reported if that was the case), I’m going to assume the attack was against their dogs. In this case, both parties could potentially sue each other, one for the death of his dog and the others for vet bills for theirs.

Of course, if it could be shown that the attack was against the couple then deadly force may very well have been justified. But the same precautions apply to be certain that you don’t shoot yourself or the other person you are trying to defend.

The author has clearly never been attacked by a pit bull/bully breed dog. Maybe if I had a weapon, I wouldn’t have lost a piece of my arm.

That is not the law in every state. For example, in my state of NH the law clearly states:

Dogs are considered property but you don’t have to just stand there and watch pit bulls kill your property.

Police do it all the time:https://www.youtube.com/watch?v=wI0aM_g1qpc

Lethal force SHOULD be legal to defend property. It used to be and rightly so. Property is life. Property is how life is defended, and sustained. By defending property you ARE defending life. Should I just allow a criminal to take food out of my children’s mouths? NO !!

Under every statute i’ve looked at “deadly force” principles only apply to human lives.

Yes, but if a person is nearby an attacking, vicious dog, that person has every reason to fear for their life and has legal reason to use physical deadly force on that animal. If a pit bull engages in an attack on an animal, this is a clear indication a person could very well be next. What pet owner will leave their pet to be brutally mauled to death? Plus there is the concern of rabies as well. It’s no different than an attacking bear or mountain lion.
I will take my chances with a jury over a loose pit bull EVERY time.

A loose Pitbull poses the same risks as a drunk person pointing a loaded firearm at all who are nearby.

All loose pit bulls should be shot to protect people in society.

These dogs are not like normal dogs and I’m dumbfounded by how they are still allowed to be kept as pets without protective regulations.

In many cases, guns must be used against pit bulls because measures that work on other breeds do not consistently work on pit bulls.

So, in this story who is more liable; the couple defending themselves with proper escalation or the pit bull owner who doesn’t keep a vicious dog contained?

I have lost my patience with pit bulls and most irresponsible pit bull owners. They are everywhere!