Leave Cross Draw To Lee Van Cleef, Unless You Can’t Help It 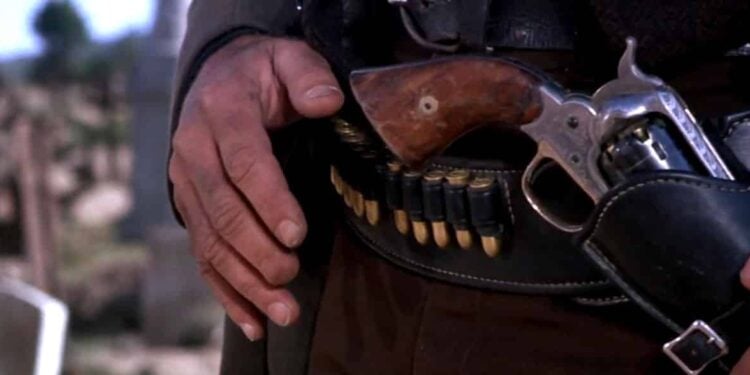 Cross draw carry can work really well if done right. The problem is very few people do.Granted, it looks awesome when Lee Van Cleef does it in the movies. But the thing is he was paid to, and when he’s paid…he always saw the job through.

There’s a reason why strong-side and appendix carry are the default carry positions for a fighting handgun. Concealment is easier, draw speed is faster and the mechanics of the draw itself are more ergonomic.

So if you’re a total newbie, looking to start concealed carry, leave cross draw to the movies.

Why Would Anyone Use A Cross Draw Holster?

Cross draw carry has little advantage over strong-side or appendix carry, but one of the few it does have is easier access in a seated position in a chair or certainly in a car.

Granted, this is for cross draw as a primary carry method; some people carry their auxiliary or backup gun in this position, which we’ll set aside for the moment.

However, let us also acknowledge that there are some exceptions. For some people, a cross draw holster may be the best or possibly only concealed carry position that works for them.

People with shoulder injuries and/or chronic shoulder issues – rotator cuff issues are a common cause of this – may find a strong-side or appendix draw uncomfortable or impossible if the range of motion is impaired.

It is also the case that people in wheelchairs can’t use a typical hip holster for rather obvious reasons.

There are also some instances in which a cross draw or something like it is necessary.

For instance wearing a chest holster or tanker holster while carrying a pack, which is common for backcountry hunters and hikers whose waist is occupied by the waist belt of a large backpack.

Some people also see enough TV or movies and get the idea that they’ll use a shoulder holster. They tend to be quickly disabused of the notion, which we’ll get to momentarily.

So, while it obviously bears mentioning that there are exceptions, the supposed benefits largely don’t outweigh the costs. However, if you think that you want to deviate from the norm (ie strongside or appendix carry) we’ll get to how to cross draw carry correctly.

In other words, this train will still stop at Tucumcari, but we have a detour to make.

The Downsides To Cross Draw Carry

The main benefit, as mentioned, is mostly easier access while seated or when driving…but offers few others unless done correctly.

In terms of speed, appendix carry is just as fast if not actually faster. If a gun is carried cross-draw on the weak side hip, it will also be slower than drawing from the strong side hip.

Another inherent problem is ergonomics. The farther you have to reach across the abdomen, the more difficult it becomes to be able to draw the gun without straining to get to it.

You shouldn’t feel a stretch when you reach for the handle; you should be able to reach your gun without straining to get to it. Cross draw often positions the gun in a position where you have to.

This is especially true for shoulder holsters, which – as mentioned – are often abandoned or only used sporadically partially for this reason. Some models are adjustable, so you can set the gun to ride in a more ergonomic location, but that won’t cure the issue for some people.

Another issue, especially if carrying outside the waistband, is the possibility of a gun grab. The grip is right there for an opponent to grasp.

When drawing from across the body, the weak-side arm can be flagged with the muzzle, unless raised, pulled back, or otherwise taken out of the way. The inside-out cowboy draw stroke – where the gun is carried butt-forward – flags the body with the muzzle.

Flagging is also an issue when using a shoulder holster. Carried horizontally, the gun flags everyone behind you. Carried vertically, the muzzle can flag the abdomen and the legs.

When drawing the pistol, the muzzle will flag the torso or weak side arm from a horizontally oriented holster and can flag the weak-side arm from a vertical shoulder holster.

Obviously, a gun is always pointed at something but flagging a person or a body part with a loaded gun is an unsafe practice.

However, let’s say for the sake of discussion that a person wants to cross draw anyway. There is a right way to do it if you’re going to.

If a person has it in their head to have their gun on the weak side, whether due to rotator cuff issues or just because, the way to do it is cross-draw appendix carry.

Massad Ayoob recommends just such a practice to reduce the ergonomic complications that cross-draw carry on the weak side hip presents.

He also recommends the old “cavalry draw” – carrying the gun butt-forward, and drawing straight up with the weak side hand and turning the gun toward the target after clearing leather – though some people may find the wrist contortions uncomfortable.

It has all of the advantages of cross-draw – easier access while sitting, less strain on the shoulder – as well as all the advantages of appendix carry. The appendix position is the fastest to draw from when concealed, and concealment is incredibly easy.

So long as you have the body shape that is compatible with appendix carry – and that doesn’t mean if you have a spare tire; what seems to be the case is a high natural waist – it’s a great carry position if cross-draw is your preference, and ultimately the best or arguably only way to do so.

Cross draw has a benefit rarely mentioned, but fundamental. It is possible to draw with your non-dominant hand from that position, too. Something useful when your dominant hand gets cripled at the start of the fight.

Well, there are safety issues with appendix, like flagging your 3 piece set or femoral artery.