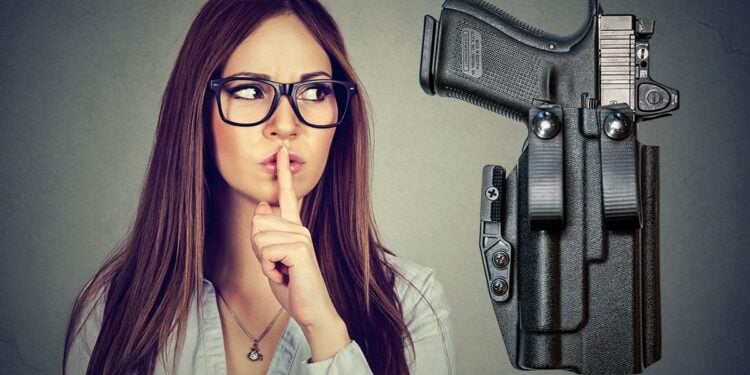 Concealed carry continues to expand, with some estimates at 19 million carry permit holders nationwide. Obviously, there are also quite a few states that have gone to constitutional carry, thus requiring no permit at all for concealed carry. Unfortunately, despite the growth in concealed carry, the public acceptance of carrying guns has not grown in all locations. There are many places within the United States where carrying may be legal, but not socially accepted. Keeping your carry gun concealed not only provides a huge tactical advantage. But it can also prevent uncomfortable, or even dangerous, confrontations from happening in public. Keeping a gun concealed goes beyond just dressing appropriately to minimize printing.

While I am not necessarily opposed to open carry, I only practice and promote concealed carry. Open carry is appropriate in certain settings, but not others. A surveyor who comes in out of the fields walks into McDonald’s while open carrying in Wyoming is more appropriate than a person who walks into a Starbucks in a city, just because he legally can. There are, indeed, some rural areas where wearing an open gun does not raise alarm in the least. For most people, however, the environment dictates otherwise.

Regardless of legality and public perception, however, the concealed handgun provides a huge tactical advantage compared to one that is carried openly. The fact that nobody knows you are armed affords you the element of surprise, should you need it. Beyond the tactical advantage, however, concealment also gives you a social advantage that may be quite necessary in certain places. If you live in an area where the sight of a gun startles others and scares them, keeping the weapon concealed is even more paramount. You don’t want to be confronted by law enforcement who are responding to a call for a person with a gun. This can lead to a dangerous situation.

Discretion is a primary concern for anyone who wishes to go armed without drawing attention to themselves, and this discretion goes beyond just concealment. Consider what other habits you have that might draw attention to the fact that you are armed. Do you wear clothing with weapon company logos? Is your vehicle covered in NRA and Glock stickers? Do you live in an environment where you are in sight of neighbors as you carry firearms to and from your vehicle? In a contentious time in which many hate the Second Amendment, this is a concern. In states that have enacted Red Flag confiscation laws, discretion is more important than ever.

The most obvious challenge that most gun carriers consider is concealment on body. The reality is that most people prove quite oblivious and do not notice printing, but it is best not to bank only on the ignorance of other people. There are two classes of people who are very likely to catch the printing outline of a concealed handgun: criminals and law enforcement officials. Generally, these are the folks who you do not want knowing. If a criminal actor realizes that you are armed, you lose that tactical advantage. If a law enforcement officer realizes that you are armed, you may find yourself in a confrontation with police. Even when carrying in a legal manner where you have every right to do so, a police officer may feel compelled to investigate what is happening, and this can lead to a tense altercation.

While some printing may be inevitable, we should work to minimize the visible signs of the gun on our person. Dressing accordingly, or scaling down to a smaller gun when necessary, are requirements for adequately concealing a gun. Remember that much can be seen when you are moving that may not be visible while standing still in front of the mirror. Along with using proper clothing, make sure that you have a secure belt and holster so that the gun does not shift around, prompting you to manipulate it throughout the day. Adjusting the gun, or touching it, is far more of a tell to others than you may realize. A secure holster and belt can alleviate this habit.

If you are an avid shooter that spends time at the range, you most likely need to transport long guns to and from your vehicle on occasion. Do you live in the suburbs with a lot of neighbors in close proximity? Then there is a high likelihood that this activity will be seen. If you have a rabidly anti-gun neighbor, you probably don’t want them to know your business. One thing to consider is the use of non-descript cases to transport the long gun. Many gun cases are specifically designed to look like anything but. A case that appears to be transporting a keyboard, or some other musical instrument, is probably lower profile than a rifle case with magazine pouches visible on the outside. Likewise, a range bag that appears mundane, like a toolbox or tool bag, may help keep your gun transportation low profile.

Resist the urge to talk about guns with anyone who you are not intimately familiar with. Don’t discuss concealed carry or anything else about self-defense with your neighbors, unless they are close friends that you can truly trust. Personally, I don’t talk about concealed carry to anyone outside of my immediate family. Beyond this, also consider discretion when interacting with different people in public. A comment to the clerk in the gas station to the effect that you would “handle” anyone who came in there looking for trouble clearly indicates that you are armed.

Letting others know that you are armed can put you in a compromised situation should something happen. Imagine being in your usual gas station when criminals enter. While you wait for the right opportunity to take the right action, whatever that may be, the clerk yells “you have a gun, do something!” Actually, such incidents have happened.

If you carry a gun, concealed should mean concealed, and discretion should carry the day. Not only does it provide an enormous tactical advantage, but it can prevent confrontations with law enforcement. And it will protect you from the malicious behavior of those who despise guns and self-defense.