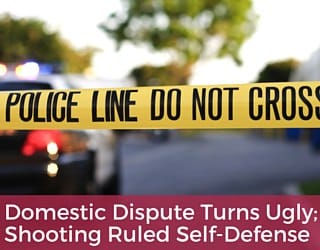 A Laurel County, KY couple’s argument resulted in gunfire.  Sheriff’s deputies say a man open fired, killing his girlfriend and endangering others. The man’s father was forced to shoot him in self-defense.

The scene unfolded in a rural portion of the county, nine miles from London KY just off Nature’s Bend Road. Officials say that Michael Allen, 29, and his girlfriend, Ashley Beckner, 26, were visiting the home of Allen’s father, one Charles Allen. Michael Allen and Beckner had an argument, and the former drew a handgun and started shooting. Beckner was shot multiple times and died at the scene. When the shooter turned to fire on others present – including the couple’s three-year-old daughter – Charles Allen intervened. Retrieving a shotgun, he fired and killed the younger Allen.

Police have determined that Charles Becker shot in self-defense.

The incident has shaken the community. Sheriff’s Deputy Gilbert Acciardo said to the press:

According to the Sheriff’s Department, the investigation is ongoing, though no charges have been filed as of the time of this writing.  Law enforcement is especially interested in the cause of the argument between Beckner and the younger Allen.