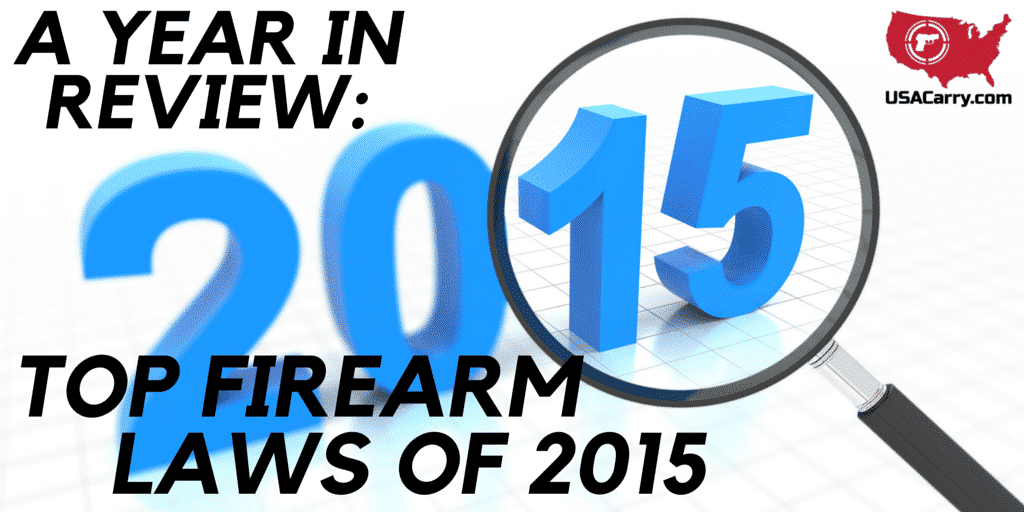 Legislatively, firearms were very much a topic of discussion in 2015. The President’s continued push for expanded gun laws via a mixed bag of new regulations and approaches dominated the news, but a great many other changes happened on both the state and federal levels. And perhaps surprisingly, it’s not all bad news; we saw some real victories for the Second Amendment and concealed carry rights this year. Here’s a list of some highlights—though I’m sure there are quite a few others I missed.

Thanks to a few proposed changes to the National Firearms Act (NFA), suppressors—commonly referred to as silencers– might be a lot quicker and cheaper to buy.  The Hearing Protection Act of 2015 removes the current 9-month process in favor of an instant background check and waives the dreaded $200.00 tax stamp. Given that suppressors are more heavily regulated in the US than in many European nations, this is a big step forward.

God bless Texas, indeed. The Lone Star State scored a big win for the right to carry this year when Governor Greg Abbott signed laws allowing open carry and carry on college campuses. The regulations behind campus carry are complex, but the open carry bill allows citizens who may legally own a handgun to carry one openly in a shoulder or belt holster. It also permits the open carry of long weapons. This is a point of pride for Governor Abbott, and indeed for all 2A supporters in that state.

Two pieces of bipartisan legislation—the Bipartisan Sportsman’s Act of 2015 and the Sportsman’s Heritage and Recreational Enhancement Act of 2015 seek to make public lands more accessible to hunters, shooters, anglers, and others who enjoy outdoor recreation. Those of us in the CCW community often forget about our friends in the shooting sports, so it’s good to see a win for them.

With mass murder and terrorism very much in the news, some well-intentioned but fundamentally misguided folks are seeking to expand restrictions on the right to keep and bear arms. This fall, a raft of various proposals and goals were introduced to Congress. While there are too many to list here, I can at least point you to a pretty good summary.  And even then, it’s not all bad news—the push for greater attention to mental health issues in this country is a positive step, at least.

It’s that time of the year again, in which knee-jerk reactionaries artificially create a new class of weapons for the purpose of trampling the rights of American gun owners. The Assault Weapons Ban of 2015 has 123 co-sponsors in the House as of this writing, despite evidence that voter support for that sort of restriction is waning.  We’re a long way from a vote on the issue, but it pays to keep watch.

So thus ends another topsy-turvy year in American politics and government. Despite the many challenges facing us, I feel fairly confident going forward.  Let me know your thoughts—and please point out any important points I missed. And, as always, stay safe out there.