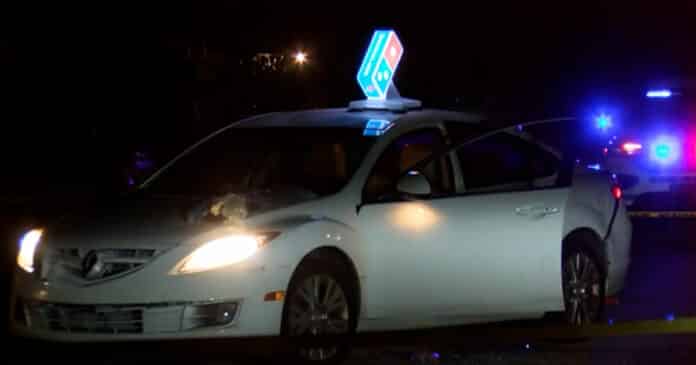 A Domino’s delivery driver decided to go against the company’s firearm policy and carried his gun to protect himself when making deliveries. But, unfortunately, he had to use it to defend himself this past Wednesday night.

As his eyes started burning, the driver grabbed his gun from the center console and shot at the suspect through his windshield, and drove off. The police later found the suspect, and he has been charged with robbery with a weapon and burglary.

It is known that carrying a firearm while delivering a pizza goes against Domino’s firearm policy. So hopefully, this delivery driver still has a job and didn’t get fired for defending himself. In an interview with a local news station, the driver said:

“Yesterday, I lost my phone but I’m still around.”

There’s a couple of things that come to mind when reading this story. First, can you use leather force against someone that pepper-sprayed you? I have to state that I am not a lawyer, and this is not legal advice. Laws vary from state to state but generally, you can use lethal force when you are being robbed. So, in this case, I would think the driver was justified.

Also, I always recommend carrying the gun on your person and not having it stashed in the glovebox, center console, or in some car-mounted holster or, even worse, a magnet mount. The driver was able to get to his gun and use it….this time. What would have been the outcome of this story if the suspect had grabbed his gun before he got back to the car?