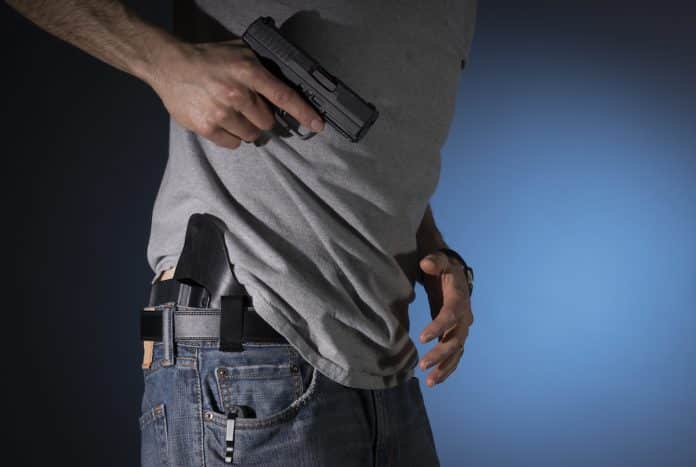 Each year there are hundreds of thousands of defensive gun uses in which somebody protects themselves with a firearm. As should be obvious, the number of people shot each year is a small fraction of this. The fact is that most defensive gun uses are actually resolved without shots fired, often through the display of the gun alone. Brandishing a gun in a defensive manner is no small thing. And there must be a clear justification for it that you can articulate afterward. Reasonable fear of grave bodily harm or death is the only such justification. However, you are statistically more likely to draw a gun and not need to fire it than you are to draw and fire.

Do You Shoot Every Time You Draw?

One deficiency that I see in most training is an over-emphasis on shooting upon every draw stroke. Obviously, this is a skill of the utmost importance, but time should also be spent drawing and not shooting. There is a potential danger that can manifest at the worst time if we train to always touch off a shot every time we draw the gun. We should do some amount of training in drawing a gun to the ready position, yet not shooting. The propensity of the body to actually do as it trains is quite real. We do, after all, train so that we can accomplish what we need under stress. If every draw stroke we do ends in a trigger press, there is a possibility that the draw may end in a trigger press, even if that is not our intention.

Therefore, how should our alternate draw stroke work? The mechanics of the draw may remain essentially the same, and fast and consistent deployment of the firearm is warranted. However, we want to program ourselves to also be capable of drawing the gun to a ready position, or full-extension, without immediately firing. This can be trained in dry fire, of course, but should also be trained on the range with a loaded gun as gaining comfort with this skill is important.

When do people draw a gun in self-defense, yet fire no shots? As it turns out, it happens all the time. A majority of defensive gun uses each year end with no shots fired. The display of a gun is often all that is needed to prompt criminals to withdraw. However, and this is exceedingly important, the only justification for drawing a firearm against a threat is if you can indeed articulate a clear fear of death or grave bodily harm.

Many people take drawing a gun too lightly, and a lot of people have ended up in prison for doing so. If such action is found unjustified in the legal system, a self-defender could face a very severe charge for aggravated assault. The only justification for drawing a gun is self-defense against a potentially lethal threat. If just the sight of the gun is all that is needed, that is good. But the situation must be one in which going to the lethal weapon is justified.

Most commonly, such scenarios involve the encroachment of a single or multiple criminals on a person who feels threatened enough to bring the gun into play. Therefore, consider what sort of circumstances would lend themselves to such a reaction from yourself. Being approached by individuals in a parking lot that are threatening you and pose a legitimate threat may constitute such an occasion, or an individual jumping out of a vehicle in a fit of road rage. Give some thought to it. Based on your own capabilities and circumstances, what sort of events would lead you to draw a gun to a ready position, but not yet shoot?

Obviously, a situation that demands a drawn gun will be one of great stress and most likely one in which you will be interacting with the encroaching threat. A good way to practice this defensive draw is to give verbal commands as you bring the gun from the holster to a ready position. Direct and simple commands such as “get back” or “stop” can be verbalized as you practice this draw. Practice drawing the gun from a position of your hands up in a non-confrontational stance, or from your hands at your side. Likewise, practice with your dominant hand only, as the need to draw the gun to the ready while carrying a child, or holding someone’s hand, is possible.

Drawing to Ready or Compressed Ready

Finally, above all else, you must practice good trigger finger discipline when drawing to a ready or firing position, but not actually shooting. Your finger should be outside of the trigger guard and up along the slide of the gun. This ensures that you do not inadvertently touch off a round when you do not intend to. Many people are tempted to keep their finger on the trigger, considering this the faster way to facilitate the shot, if needed.

The small fraction of a second gained through doing this does not outweigh the significant safety hazard. As the third rule of gun safety stipulates, “keep your finger out of the trigger guard until ready to fire.” The finger should be off the trigger at all times if drawing to a ready or extended position without the intent of immediately shooting. Training to draw and not fire does well to instill good trigger discipline, a skill that is necessary for all safe gun handling.

Drawing the gun and not firing is a skill most people are more likely to need to employee in self-defense. Yet is rarely practiced. Do some work on this particular task.