Do Airsoft Guns Have Any Value For Concealed Carry Training?

Airsoft guns can simulate the use of a real pistol. But does that mean that using them has any value for concealed carry training or practice?

Actually, yes, though with some limitations. So you could definitely get an airsoft gun as a training aid. However, make sure that it isn’t the core of your practice routine.

How so? Let’s get into that.

How you get competent at anything is repetition. Now, consider the activity you’re training for.

For the person that trains for self-defense shooting, as opposed to the hunter or competition shooter, it’s to draw from concealment and shoot a threat. You have to clear cover, draw, present, gain a sight picture and press the trigger, and in a compressed time frame.

Obviously, you want to do at least SOME of this with your actual carry gun and with live ammunition at the range. DUH. The operative question here is how much value you can get practicing with an airsoft pistol instead of your actual firearm.

Well, the only element that is dependent upon using live ammunition is recoil control. Obviously, this is necessary for handgun shooting drills using multiple shots, but not necessarily for a single shot from concealment.

Heck, most instructors will recommend you practice all those skills in your dry fire regimen, which – ultimately – means that’s what you’re using an airsoft pistol for. That would mean a best practice, obviously, will be to purchase one that is as close a copy as possible to your actual pistol.

And why would you want to do that? Well, a SIRT Glock laser training pistol will run you anywhere from $250 to $500, depending on options. You can pick up a Glock airsoft pistol for $60 for the cheap ones, or level up to a gas-operated model with a working blowback slide (simulating recoil) for about $120ish on up.

It’s not quite champagne on a Budweiser budget, but it’s damned thrifty.

Granted the weight of the gun will be different, the trigger pull may not be the same, and the sights might be different. Will that mean all your work will be for naught? 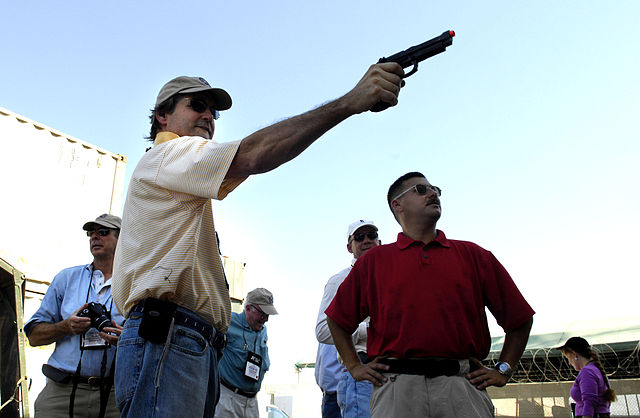 Well, repetitions matter. If your technique is good, putting in pistol practice with an airsoft gun should have a positive effect at the range.

That’s why militaries and police academies use airsoft in training environments, supplemented (of course) with live-fire training as well.

Since it is, again, basically dry fire…it’s going to have benefits. We all know by now that dry firing should be a cornerstone of your training regimen, so good reps are good reps.

If you want a visual demonstration, T. Rex Arms invited social media personality Liku Tactical, an airsoft shooter who does practical shooting with airsoft guns, out to their range and let him use the real thing. You see, Liku is Japanese, and they have REAL strict gun laws. Prior to this video being filmed, he had never shot a real gun before.

They start off with simple handgun shooting and then get real nutty from there. Again, he had never fired a real gun in his life. So yeah, you can totally use an airsoft gun for real-life training.

Again, IF you wanted to use an airsoft pistol as a dry-fire training pistol, make sure to get one that’s as close a copy as possible to your actual carry gun.