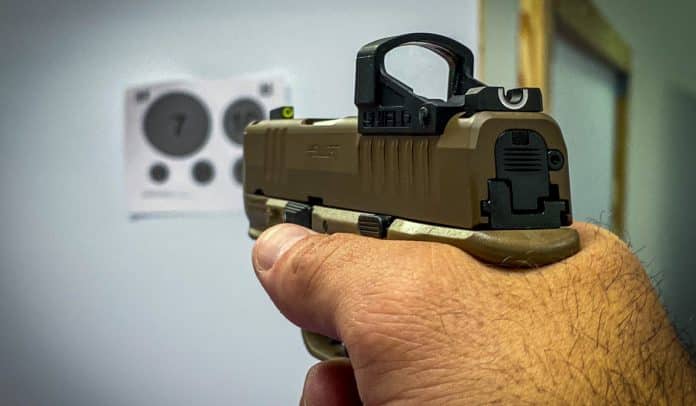 Dry fire training is necessary and must be part of your practice routine if you want to maintain skill with a firearm. While nothing can replace live fire, dry firing can get you a lot of meaningful reps for free.

But how can you effectively do it without blowing a lot of money?

After all, not everyone can or even wants to spend the extra cash on a Mantis system, or on one of the laser and tracking software set up. Not everyone has the money to also buy a CO2-operated recoiling air gun to simulate recoil.

You can get all you really need for dry fire training for a few dollars. For basically the change you find in the couch, you can set yourself up with everything you need; it doesn’t take much.

NOTA BENE: Before we go any further, make sure you’re following proper safety protocols. CLEAR YOUR GUN OF ANY AMMUNITION BEFORE DRY FIRING.

So let’s talk about putting together a dry fire training system for the complete minimalist.

What You’ll Need For Dry Fire That Isn’t Cheap

Unfortunately, there are a few things you need that aren’t cheap in order to do effective dry fire training, but this is presuming you don’t already have those things.

First, you need a gun.

Second, if you’re doing your dry fire training with a handgun, you need a holster and a belt.

If the concern was readying yourself for competition or hunting season, then these things would not be necessary. However, we here are concerned with use of a firearm for defensive purposes.

To that end, we must train with the tools of the task. For concealed carry, that means your concealed carry handgun, carried in a holster and supported by a belt. You need to use the holster you use to carry the gun, and the clothes you normally wear.

Using a range rig would defeat the purpose, so don’t.

Everything herein applies equally to a long gun kept for defensive purposes, such as a home defense shotgun or carbine.

You dry fire with your long guns too…right?

Get Two Cheap Targets For Dry Fire: One Very Small, One Not

For the ultimate minimalist set up for dry fire training, you will need two targets. One should be very small and one should not be.

For the very small target, you want a very tiny object that you can aim at. This target is for honing those fundamentals, such as grip, trigger press and sight alignment.

The idea is to get the sights on target and press the trigger. With proper technique, the sights won’t move.

What I like to use is one of the paste-up stickers from a Caldwell or other brand sticky-back target. They’re less than 1 inch in diameter. You could also get some stickers from a dollar store, tape a nickel to the wall, or find some very small and identifiable thing across the room.

The idea is to have something very fine to aim at, and work those fundamentals.

It’s also a good idea to have some snap caps, but it isn’t strictly speaking the most necessary thing in the world.

Next, get a bigger target.

The larger target will be for the purposes of drawing, aiming, and dry firing.

You could put an actual target up, such as an NRA B8 Rapid Fire target. You could tape up a 6-inch paper plate. Or you could use something that’s already on the wall or a bookshelf.

The idea is to have a larger target area than the tiny dot on the wall. This allows you to do the more practical work of drawing, acquiring a sight picture, and “firing” in a manner where speed is a factor.

Therefore, train to draw, aim, and fire at a target of that size.

Get A Shot Timer App

Next, we have the crucial addition of a shot timer.

The good news? You don’t have to pay for one. Having a physical shot timer is a fantastic thing to invest in, but the thing is you don’t strictly need one. Plus, they’re kind of expensive.

There are a few shot timer apps that you can install on your smartphone. The one I recommend is the Splits dry fire app. While not without some limitations, it’s free and darned if it doesn’t do the basics of what you need.

The same publisher has a shot timer app for range use as well, which is also free and likewise well worth installing.

Returning to the idea of targets, you use the tiny target to fine-tune those fundamentals but you use the large target to train up the practical skills. Throw in a shot timer to work up to speed.

As Aristotle said, we are what we repeatedly do. It is through repetition that we learn to do anything, so put yourself in a position to do the meaningful work that you can in dry fire practice.

Dry fire practice is where you hone the fundamental skills like grip, sight acquisition, and alignment and the trigger press, as well as drawing and presenting the gun to the target…but you need live fire practice for everything else.

Obviously, dry fire doesn’t do everything; live fire needs to happen, too. But you can get in a lot of meaningful repetitions without having to expend any ammunition and without spending much money.