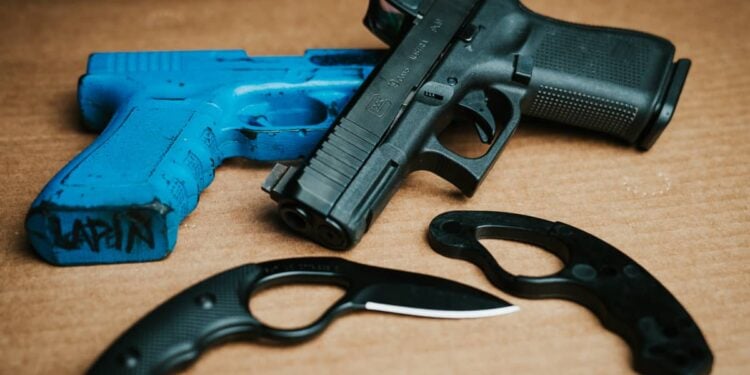 Inert versions of your actual personal protection tools serve several beneficial purposes in your training. An inert gun, such as the industry-standard plastic blue guns, is an important part of self-defense training. Similarly, if a knife is part of your personal protection plan, an inert trainer for it is in order. These tools allow you to safely train with your weaponry in a contact-distance context and do so safely.

Even with ballistic weapons such as the handgun, real-world fights often begin at contact distance where a hand-to-hand struggle may ensue. This is considered by many defensive shooting practitioners to be a worst-case scenario. The advantage of the ballistic weapon, and the advantage you may have as a good shooter, are entirely mitigated if you can’t get the gun out and into the fight, or if the gun is actually taken from you by a strong and determined attacker. Having a developed hand-to-hand fighting skillset is very important for this scenario, and having inert versions of your weapons is an integral part of being able to develop these skills. What skills, in particular, will inert training weapons help you hone?

A blue gun can be used for practicing your draw stroke in dry fire, although you can’t actually fire the gun. Therefore, it is not a replacement for doing true dry fire, in which you must safely unload and secure your gun and environment. However, the benefit of the blue gun is that you can practice handling, such as the draw stroke and ready positions, on-demand, and very safely.

Similarly, if a knife is part of your self-defense plan, the inert training knife proves safe for handling in any environment without the risk of cutting yourself or someone else. Handling a live knife in practice is risky for most who are not truly dedicated knife practitioners. For most shooters, a knife is primarily a utility tool, but if it is something that will serve a backup self-defense role, being able to safely practice with the tool is important.

A blue gun is an essential tool for practicing handgun retention, which is a skill that concealed carriers should get training on. If you end up in a contact distance fight in which an aggressor discovers your gun, you may face a disarm attempt. An attacker who is determined enough to disarm you will be determined enough to kill you with your own gun. Other innocent people in the vicinity will also be at the mercy of that individual once they have the gun. If you carry a handgun it is your responsibility to know how to retain it in a struggle. The blue gun is the tool for practicing this skillset.

You should attend professional training on retention and disarming, I can’t recommend that highly enough. After such training, you can work with a training partner from time to time to keep these skills sharp. An inert blue gun gives you the ability to work these skills safely. There have been plenty of incidents in which live handguns have been used in this context and a weapon remains loaded, resulting in a negligent discharge, sometimes resulting in serious injury or death. Disarming and retention training should be done exclusively with inert training aids.

Similarly, an inert training knife allows you to work with a partner in practicing these contact distance skills. For a gun carrier, the most likely defensive role a blade may serve is as an aid in retaining your handgun. A knife can serve as a space maker, allowing you to make space from an attacker, thus providing the ability to draw and deploy the gun. At contact distance a knife is a much harder weapon for an adversary to disarm, so there are circumstances in which producing a knife may be warranted for the safety of yourself and other innocent people in the vicinity. The training knife allows for this practice in force-on-force. Likewise, hand skills against a knife attack can be safely practiced with an inert training blade.

The blue gun can be used on a heavy bag or a B.O.B bag to practice weapon strikes, which are a useful technique at contact distance. There are scenarios in which hitting a contact distance attacker with the gun can buy you time and space so that you can get in position to shoot. Even modern day polymer framed pistols can make for effective striking tools. I primarily favor strikes that involve hitting an adversary in the temple or ocular cavity with the top of the steel slide of the gun. Also, forward strikes that drive the barrel of the gun into vulnerable areas of the head can have a significant influence in dissuading an attacker. Such an impact can very likely force a break in contact, allowing you to escape the grasp of the assailant. Such a strike might even prove forceful enough to end the fight before shooting is needed.

Blue guns are robust and you can hit with full-force on heavy bags or B.O.B bags without damaging them. Similarly, the inert training knife can be used on heavy bags as well with little risk of damage to yourself, to the bag, or to the training knife itself, if it is a tool of high quality. Obviously, you will need to scale back the force when practicing these skills with a live training partner. Weapon strikes are an important part of contact distance fighting, and inert training weapons allow you to practice these skills safely.

Consider these reasons for implementing the use of inert training weapons into your own self-defense practice. Having a good command of contact distance skills will put you ahead of the game.