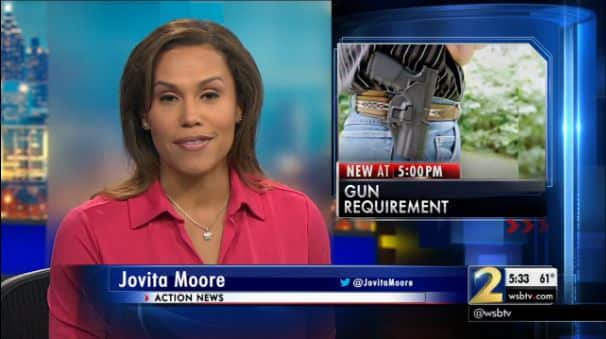 Once they get their license, he also hands them a Taurus Judge.

“Everybody has one of these in their drawer or on their person. I would not want to come into one of my facilities,” Toland said. “It’s a 5 shot 410, just like a shotgun and you call it hand cannon.

According to Toland, none of his employees objected to his mandate.

“I said, ‘We’re all going to get firearms,’ and it was a unanimous, 100-percent participation, no dissenters whatsoever,” Toland said. “It’s about protection, No. 1, but it’s really about us as citizens of this great country enjoying and using our right to bear arms.”

Of course I am all for concealed carry, but a Taurus Judge? I don’t know if I’d want to lug that beast around all the time…I’ll stick with my Ruger LCP.

He could get the poly framed one with the 2″ barrel. That weighs something like 23 or 24oz.

Wouldn’t the recoil on that be pretty stout?

Only if the trigger is depressed in in a rearward direction with appropriate ammunition stuck in those little round holes.

He could also tie a helium filled balloon to the barrel. That would greatly reduce weight.

Or I would request a different gun. I don’t care for shooting shotgun shells in pistols. I’d rather have a regular revolver. Too bad Taurus doesn’t make the 450 or 445 anymore.

That said, I’d rather use my commander.

Was it a gift given to you by an appreciative employer who cared enough for your safety and well being as he attempted to provide you the means with which you might defend your life?

I have to say the Judge is an awful choice for smaller framed people who do not have much experience with guns.

However, giving one to each employee for free certainly gives the impression that he appreciates each person`s efforts and encourages them to be armed.He obviously cares a great deal about the safety and well being of his employees.
No matter what weapon was chosen as the symbol of his appreciation, some brain dead fool would have some objection that it was not the right choice since the brain dead one has another preference.

My gosh, people. The guy is light years ahead of all the businesses that restrict Second Amendment rights, and all you can do is dis him for his choice of a gun that he gives FREE to his employees? Catch a clue, people.

I fully support concealed carry. I have multiple CCW permits myself. I do not, however, support a business owner “requiring” his employees to carry. It should be a choice.

You’re basing your entire opinion on the very small amount of information provided in the very short article. I seriously doubt that he would be the kind of person to force someone to carry or fire them if they didn’t want to. In truth, that wouldn’t even be legal.

As for the 2A and businesses . . yes, they can restrict your rights on their private property, and we can indeed take our business elsewhere. What does that have to do with this story.

You are entitled to your opinion, as am I. As for me, I applaud him because he is empowering people not to be victims, unlike so many other Liberal businesses and governments. And I don’y know for sure, but i seriously doubt he is giving guns to people who don’t want them and will allow them to be taken by criminals.

Honestly, the things you are saying sound an awful lot like the arguments the liberal antis use against gun ownership and our right to protect ourselves.

The title of the article is “Employer REQUIRES Employees to get ccw, gives them a Taurus Judge.” Whether he’s forcing them to carry or not, it doesn’t really matter. He’s forcing them to have CCW. Again I reiterate, it should be left up to that person. If my boss requires me to do something and I refuse, I’ll get an Article 15. Or, at the very least, I’ll get the shit smoked out of me. To echo you: I don’t know that he is, but firing someone who refuses to have a CCP seems wrong to me.

And whether you agree with them or not, lumping all liberals into a group that you rail against isn’t any more constructive than the far left claiming that all guns are bad and nobody, regardless of the situation, should be armed. I know liberals that are pro-gun (myself included) and I know conservatives that are anti-gun. Those of us who are liberal and pro-gun just feel like we should do a little better job of keeping guns out of the wrong hands.

First, my original comment that you responded to was about people dissing his choice of the gun he gives his employees and you felt obligated to jump in and contradict me that a business can’t restrict rights, which I still disagree with you on.

Second, I know what the title says. Contrary to the stereotype people like Obama and Pelosi and their Liberal disciples put on us, Conservative gun owners are not all illiterate trailer trash called Bubba. Although, in the current state of the world, I will readily admit that I “cling to guns or religion,” as your Liberal Messiah said, and you being a Liberal I would imagine you voted for him both times.

Did you actually watch to the video? It doesn’t sound like anyone got fired or even had a problem with it, and the woman who was interviewed made it clear that everyone was willing to “commit to training, commit to becoming an expert on the firearm, and commit to be willing to use it if you have to.”

And I agree with you on one point at least; any business that tries to restrict my right to defend myself doesn’t get my business. Most mass shootings happen in Gun Free Zones and in cities with extremely Liberal governments that make it very difficult for people to carry a gun for self defense. Cities with horrendous crime rates like Baltimore, Chicago, Washington DC and New York, and all the Liberal governments use the lofty sounding excuse that “we should do a little better job of keeping guns out of the wrong hands.” How restricting gun ownership by law abiding citizens while the criminals are armed to the teeth will accomplish that is something no one has been able to explain to me yet, but you’re welcome to explain it to me if you can.

However, to be fair, I can see that you are not far Left if you are pro-gun, although I don’t agree with your reasoning about keeping guns out of the wrong hands by restricting the rights of law abiding citizens to own and carry them. Nor am I far Right because I firmly believe the government has no right to dictate who people can marry, and my wife and I both have friends who are in same sex relationships and many of them go to the range with us.

I guess what I’m trying to say is that it seemed like you came out with a chip on your shoulder to correct my semantics when I said that “The guy is light years ahead of all the businesses that restrict Second Amendment rights.” If I am mistaken, or interpreting your comments and perspective incorrectly, then my apologies but my original sentiment remains unchanged . . . the guy is light years ahead of stupid businesses that think if they restrict honest people’s rights to be armed they will somehow magically prevent the bad guys from coming in and doing bad things.

Exactly the problem we have today – every article’s comments quickly deteriorate in to name calling and finger pointing over a mistake in grammar or spelling. No one has anything nice to say, but worse yet they can’t even stay on topic while they are bitching.

And yes Huge Kudo’s to Mr Toland. His actions have also taught a company full of people to learn and respect firearms as well as to learn to shoot. Most will probably now exercise that right forever, but even the ones who don’t will have their opinions changed forever.

Thank you and I agree completely.

If I had to take a guess, I would imagine he’s not going to give you a bunch of grief if you instead choose to carry a handgun of your choosing if you’re already prepared. That would only make sense.