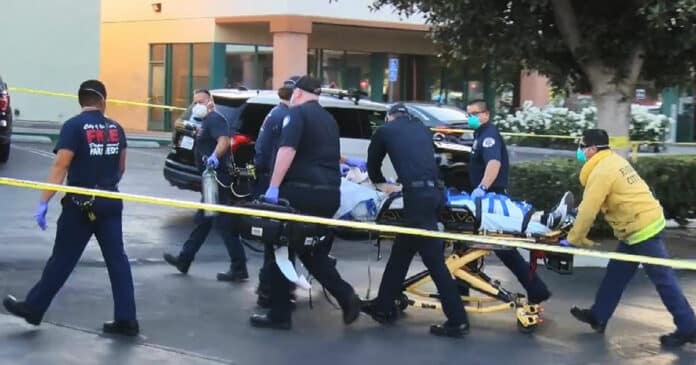 Joseph Anthony Jimenez, 33, was shot by one of his victims after stabbing two former co-workers at the Carlos Barber Shop in Riverside, CA.

Officer Ryan Railsback of the Riverside Police Department said the victims were okay and suffered non-life-threatening injuries, as a sign outside of the shop read, “Our barbers are okay and safe, just healing today.”

A manager of the barbershop declined to comment on that attack, unbeknownst to many customers the day after the attack. According to Officer Railsback, Jimenez entered the shop before 7 P.M. starting an altercation. He then stabbed one man and another who intervened. The second man drew a gun and fired at Jimenez. “The suspect collapsed right outside the business,” Officer Railsback said. Jimenez was taken to a local community hospital where he died.

The second man should be applauded for saving who knows how many more other people inside the shop, but he could have stopped the actions of Jimenez without harm to himself. Whether or not he was carrying concealed or had his firearm ready elsewhere, it would have been best for him to keep his distance, especially against a knife-wielding assailant before intervening unarmed.

When these self-defense situations occur, it can be understated just how much room one has to eliminate a threat let alone on top of the allotted time. You need the best amount of space you can get to further close in and eliminate a target. Fortunately, he was armed against this suspect, only in terms of self-defense, he could have prevented harm to himself.

With regards to Jimenez, he still had his Barber & Cosmetology license active at the time of his death, in which detectives are still undetermined as to the motives for his attack. Detectives also consider this case to be self-defense, but the DA’s office will have the final say on any applicable charges to the defender.