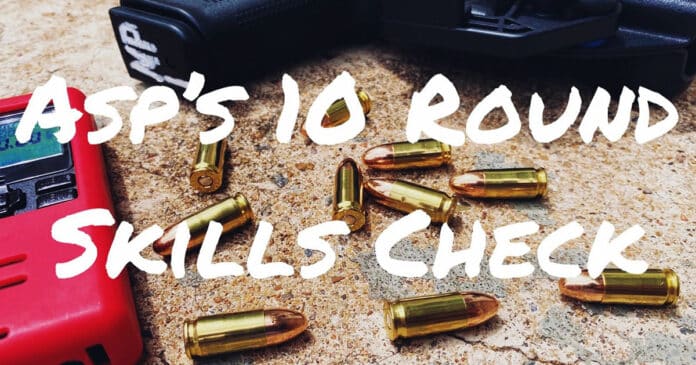 If you aren’t familiar with Active Self Protection (ASP), you have found a really good rock to hide under. John Correia is the mastermind behind ASP. He runs two YouTube channels, teaches classes around the country, and attends a great deal of training from other high-level instructors. Quite honestly, he is probably one of the most influential members of the firearms community right now. He came up with this 10 Round Skills Check as an assignment at a Rangemaster Instructor course. Since it only uses 10 rounds, I figured it was about time to get around to trying it.

The assessment has 4 strings of fire, all shot from the same 7-yard distance, on the same target. The target that is supposed to be used is a USPSA target, although an IALEFI Q or IDPA target is allowable stand-ins per John. All I had on hand was an IALEFI Q, so that is what I shot the assessment on. He doesn’t explain the scoring for the IALEFI target, so I just winged it.

The course of fire is straightforward, with only 4 strings of fire. All strings are shot from concealment, hands relaxed at sides, in a fence, or in what I call the “cheater” start (what John calls fig leaf), minus the garment grab.

String 1: Draw and fire 1 round center mass. Repeat for a total of 2 repetitions.

String 2: Draw and fire 2 rounds to the head.

Each string of fire needs to be timed and that time recorded. At the end of the assessment, add all the times together. We will need this later. If you have a shot timer that can do it (See my CED7000 Shot Timer Review), you can have it add the times together for you as I did.

Points are assessed as 5 points for A-zone, 3 points for C-zone, and 1 point for D-zone hits. There are no makeup shots allowed, so the number of shots specified per string are the only shots allowed. At the end of the assessment, add up all the points for a total number of points. 50 points is the max score.

This is where it gets a little complicated if you are not familiar with hit factor scoring. You take the number of points and divide it by the total time it took you to shoot the assessment. That will give you some oddball number. Then multiply that number by 12.5 to get your actual score. It should look something like this.

When limited to 10 rounds, there is only so much ground that we can cover. If we consider the core competencies of defensive use of a handgun from a performance perspective, does this assessment hit the high points as it is designed to? In general, I would say it does. There is an emphasis on a quality draw since every string of fire requires it, and the draw consumes a lot of time for each string. The accuracy requirements are fairly standard, and distance is fairly standard.

The draw to two low-probably shots, I think, is something that is missing from many assessments. We tend to think of the self-defense problem as not requiring a higher level of accuracy than hitting a “man-sized” target. Really though, we are not shooting at a person. We are shooting at the small internal components of the person to be as effective as possible in as short of a time frame as possible.

I understand the purpose of the bill drill (the 6-round string of fire), but I really think we could accomplish that with fewer rounds. The majority of the points are tied up in the bill drill, weighting the assessment to that specific string of fire. Taking a couple of those rounds away would open up the assessment to j-frames and stuff like that and also move some of the points around to even things up a bit more.

Even though it isn’t perfect (what is really?), I like the assessment overall. In large part, because it is very quick, requires very little in the way of ammo, and has a good scoring system. Theoretically, the scoring does not have a floor or a ceiling. It should be able to meet any shooter where they are at and track performance over time even if they become the next world champion of all things. I place a lot of value on that.

Head out to the range, give it a try. It is only 10 rounds and will give you a snapshot of your skill level to show where you are now and to look back on later.