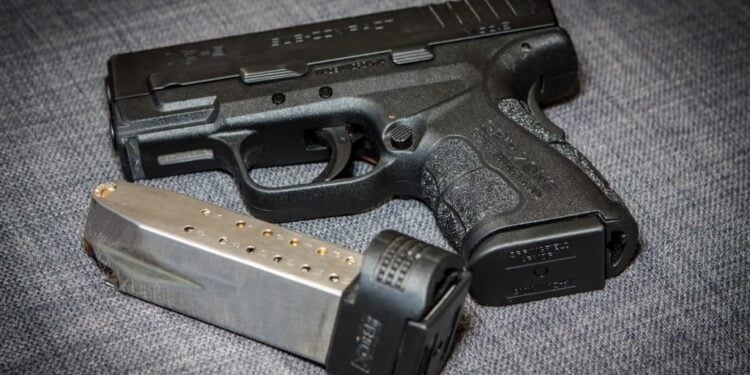 One of my first concealed carry pistols was an M&P Shield chambered in .40 S&W. This gun had a whole lot of snap to it, and it only holds six rounds in the magazine. I really wanted a pistol chambered in .40 S&W, but the capacity was cause for concern. It concealed exceptionally well and didn’t print much. It was a good fit for me at the time.

When it came time to train, I noticed I had to change magazines very quickly. Six rounds go fast. So, when I purchased the eight round extended magazines, I wanted to see if this made things any better.

There’s not much difference between eight and six rounds in a magazine. I don’t feel it made my life that much easier.

I still carried them. I loaded an initial six round magazine in the gun when I put it into my holster and put one of the extended magazines in my pocket.

The flush 6-round magazine was easier to conceal, and the eight round extended magazine was pretty flat and fit well in my pocket.

So long as I trained to switch between the two, I should be fine.

Did that decision pay off? Not really. The extended magazines and additional width in the P320 pretty much removed it as a warmer weather concealed carry option for me. I loved the capacity and how it handled, but it just didn’t make sense to print that badly. I like keeping a low profile.

When dealing with a concealed carry pistol, extended magazines make more sense as a backup to whatever magazine prints least.

I don’t think that extended magazines for concealed carry pistols are a terrible idea at all. I do recognize that it’s probably less visible to use a flush magazine as an initial load and a backup extended as, well, backup. Visibility is a big deal in concealed carry.

I think the only time extended magazines don’t make sense is in situations like the Glock 26. Glock 26 magazines typically hold between 10 and 12 rounds. That’s, in my book, a reasonable number of rounds for concealed carry. If I felt the need to push a larger magazine, the Glock 26 accepts my Glock 19 15-round magazines in a pinch.

This is probably one of the most innovative ways to extend magazine capacity without gouging the crap out of the customer — a real rarity in the gun industry. It’s for this reason why I generally respect anyone’s decision to carry a Glock 26, even though I don’t.

In conclusion, if you find that extended magazines make carrying a concealed handgun more difficult, switch down to the flush fit magazine and keep that extended mag as backup. You will never regret having a backup magazine and, if you need it, you certainly won’t mind that it has a few extra rounds loaded.