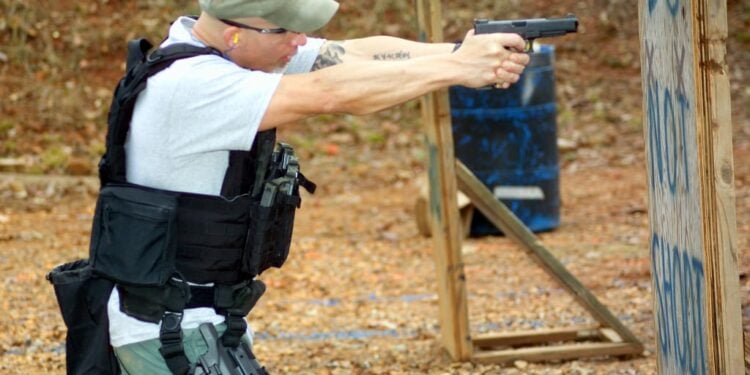 The average citizen that acquires a concealed carry permit spends dreadfully little time training with their weapon. But for those of you that do take your self-defense more seriously, this article will explore a subject worth considering and worth some effort in training: Shooting from and around objects of cover. While most armed citizens will never need the structure-clearing tactics or vehicle tactics of law enforcement or military units, there are some aspects of using cover that are important.

Here we will look at the mechanics of shooting around cover and concealment as this is an essential skill if you need to defend yourself in such an environment. The vast majority of our life is spent living amongst environmental structures, whether human-made or natural. Most armed citizens spend little, if any, time training on how to shoot from around, below, or above these obstacles. Regular square range training typically ignores this skill, and I encourage you to do some practice in this regard.

Before talking about using cover, we need to understand the difference between cover and concealment. Cover is an object that will stop the incoming bullets from an adversary. Obviously, an object that may provide cover against a handgun round may not stop a high-powered rifle round. So, cover is entirely relative. Concealment is an object that will not stop the incoming rounds but will at least hide you to the visible sight of the opponent. Needless to say, we want to get behind cover should we be caught in such a horrid situation, but if only concealment is available, it is indeed better than standing in the open.

Let’s start with the use of a typical “barricade,” like a solid wall with a corner that you may be shooting around. What people tend to do by nature is to “crowd” the cover. The object of cover lends a feeling of security to anybody who is taking cover behind it, so it is the default inclination to press right up against the object. In the case of a sold wall, most people will lean against it, in the case of an automobile most will lean against the side of the car itself as being in contact with the protective object provides a sense of security. The issue: this is not the optimum place to be in relation to your cover if you wish to return fire.

When shooting from cover, we typically want to be roughly two arm lengths away from the object if possible, perhaps further if the environment allows. There are four reasons for this:

When shooting around a barricade, the two arm’s length allows you to minimize your profile to a hostile. Older tactics promoted actually resting your hands with the gun against the side of the barricade or on top of the hood of a vehicle. This tactic does nothing but expose that vital portion of your body to gun fire. It also lessons your ability to move around the barricade or to see your surroundings. By maintaining several feet of distance, we can expose only the gun and the eye behind the gun as we more freely move to “slice the pie” of the corner or come over the top of a hood. If we are crouched behind a vehicle, the distance gives us the ability to only expose the gun and a minimal amount of our head behind the gun, rather than laying our hands over the hood. The added benefit, if rounds bounce up and off the hood of the vehicle, or off the side of a barricade, being further back puts us in a far less likely trajectory. The most critical elements of shooting from cover: Give yourself space and minimize your profile.

Getting comfortable staying back from the cover takes some practice. If you can, while shooting at the range, stand up a barricade of some type and practice these shooting techniques. If you can’t practice this at the range, then try practicing this at home. Safely, preferably with a training dummy gun, approach a corner in your house and maintain your distance and practice presenting only the gun and a minimal part of your head behind the gun when shooting around the barricade. You can do the same from behind a couch to simulate a car hood.

The skill of shooting around cover and the tactics of minimizing your profile behind the cover work into the entire gamut of angular searching and moving in a “tactical” manner in the face of possible or definite danger. If we need to fight for our lives or the lives of those we love and we need to do so around various interior or exterior structures we want to take full advantage of the cover, or at least concealment, offered by the environment. I encourage you to seek out further information regarding shooting around cover and certainly seek out training. Shooting around objects of cover is an essential defensive shooting skill.