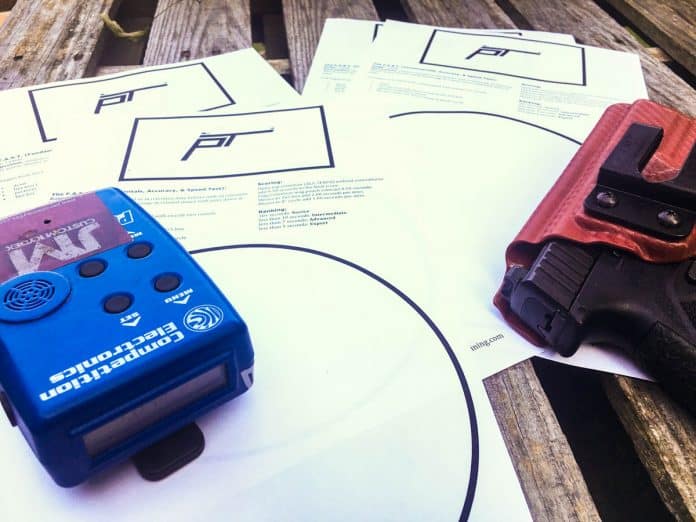 About 2008-ish, I stumbled upon Todd Green at pistol-training.com. I didn’t really know the guy, but he had a pretty cool blog, I liked what he wrote, and I knew he shot a gun way better than I did. The “drills” section of his blog was a treasure trove of drills and tests.

When I first saw the Fundamental, Accuracy, and Speed Test, or FAST, I thought “that doesn’t seem too hard.” But my first attempts at the FAST told a different story. It was quick to point out my weaknesses and didn’t take any prisoners. The FAST became one of the first shooting exercises to really push me towards a higher skill level, and to this day, is a regular metric I use to see how I am doing.

The FAST is a six-round drill and requires the shooter to draw to a low probability 3”x5” target, accomplish a slide lock reload under time pressure, then finish up with four rounds to an 8” circle. Misses add penalty time to the total time, but really, only clean runs count in my book. When Todd was still around and teaching classes, students in his classes had to shoot the FAST clean to earn a coin, so I apply the same rule to myself. Clean runs are the ones that really matter.

There are a few different ways to shoot the drill. There is actually a printable version of the target available HERE on pistol-training.com, just make sure you print it off on legal size paper. The printable version also has the scoring/skill level break down and how the test is to be shot and scored on it. You can use an IDPA target and put a 3”x5” index card in the head box and use the -0 for the last four shots. You can also use a printable version of a B-8 repair center, or an actually B-8 repair center, and a 3”x5” index card on any target. If you use the B-8, the eight ring is 8”, so all of your shots after the reload need to stay inside the eight ring.

It is important to realize that while we typically set the drill up as the first two rounds being “head shots,” that is really not what is going on here. What the first two shots out of the holster are doing is forcing a draw to a smaller target than what we typically see used. In the defensive application of a handgun (or any gun I suppose), we are shooting at fairly small bits buried deep inside our bad guy’s body. Using targets that have some semblance of similarity, at least in size, makes sense in that regard.

It is typically these first two shots that give me the most fits. I either go too fast and blow past my sights, or go slow and get my hits, but leave too much time on the clock. Learning how to manage the sights and stay within your shooting ability is an important part of this drill in my experience.

The slide lock reload that follows the first two shots is a pretty big chunk of the FAST compared to the actual shooting that takes place. In all, I spend about 2-3 seconds on the draw and shooting, and another 2-3 seconds on the reload. Taking up nearly a half of the time in the drill, it is important to really work out the bugs on your slide lock reloads to pull off a good time on the FAST.

After the reload, it is time to really gas it if you can. An 8” circle is kind of the standard size target zone for the high center chest of a threat target. It is small enough to keep us honest, but also large enough that if we have our recoil mitigation techniques squared away, we can really get after it. How we transition from the reload back into shooting will matter here, we have to re-establish a sound grip on the gun, get back on the sights, and work the trigger well.

There are almost a half-dozen skills being tested in the FAST. While it isn’t the “end all, be all” of shooting tests, it is a very efficient use of 6 rounds, and will give us a significant amount of data to figure out what needs work. Our draw is tested, our ability to really get on the sights and manage the trigger to make some tighter shots at speed, our ability to perform a slide lock reload, and our ability to run the gun as fast as we can on a larger target after the reload. Be sure to give it a try and let us know how you do in the comments. If you have any other drills you like, be sure to let us know about those too. We are always looking for new drills to try.