We explore one of the reasons to carry Appendix Inside the Waistband. 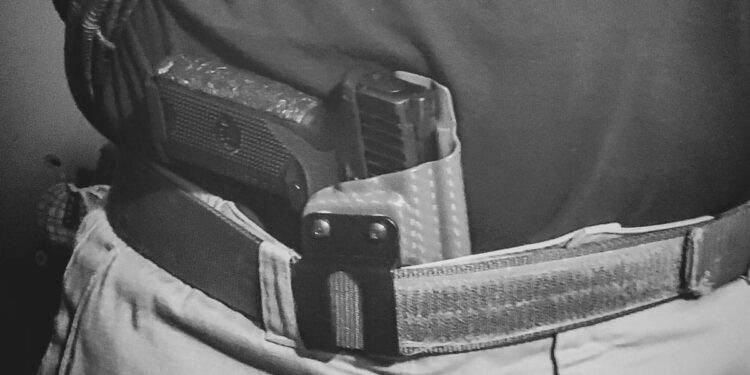 Appendix Inside the Waistband (AIWB) is in many ways the “trendy” way to carry a gun these days. It isn’t anything new but is definitely what all the cool kids do right now. There are a lot of reasons for AIWB being so popular, some reasons better than others. For me, initially, it was the speed from concealment that drew me to it.

Perhaps there is a debate to be had on whether or not a fast draw speed is a worthwhile skill to have, but for the purposes of this article, I am going to default to the position that it is. If you are into performance-oriented shooting, like I am, there is a significant amount of time spent working on drawing the gun faster. Especially when you combine the number of dry fire reps with the amount of time and rounds expended in live fire. Once a certain skill level is attained, those performance improvements become smaller and smaller. Eventually, we start chasing 10ths of a second; reaching the highest levels of efficiency we possibly can with the resources we have available. Generally speaking (there are of course exceptions), people will be faster from AIWB than “traditional” IWB at 3:30-4:00 o’clock. How much faster? Well, I don’t really know how much faster you will be, but I know how much faster it made me. With hardly any work, I gained on average just under a third of a second. Breaking it down another way, that is about a 15% improvement in speed, right off the bat. As I refine my AIWB draw and build that specific skill a bit more, I hope to be at least a half second faster on average than my best times when drawing from strong side IWB.

This isn’t my first go at AIWB. Many moons ago, like 7-ish years ago, I took a swing AIWB and just couldn’t get it to work. In hindsight, I realize that the equipment I was using to carry AIWB was not well suited to the task. This time around I opted for a purpose-built AIWB holster from JM Custom Kydex, and it made all the difference. Be sure, if test-driving AIWB, to use a high-quality purpose-built AIWB holster, it really does matter.

Seek information from guys that know how to carry AIWB, understand the challenges associated, and are capable of teaching safe and efficient carry methods. The guys I pay attention to are Spencer Keepers (Keepers Concealment), John Johnston (Ballistic Radio), Craig Douglas (Shivworks), and Scott Jedlinski (Modern Samurai Project). There are of course others, but you will not go wrong if you seek those guys out and listen to what they have to say. Spencer Keepers specifically has a one-day AIWB class that is a good place to start if you have questions or aren’t sure about it. He will even let you test drive one of his holsters.

I am around eight months into AIWB, and hardly consider myself an expert on the topic, but as someone who was resistant to switching over initially, I am nearly 100% sold on the carry method now. If you are on the fence about AIWB, I would recommend seeking out the guys who teach it for a living, and listening to what they have to say. I didn’t think I would be so easily converted, but I doubt I will be going back to strong side IWB anytime soon, if at all.

The FAST: An Efficient Test of Your Shooting Skills

The FAST: An Efficient Test of Your Shooting Skills