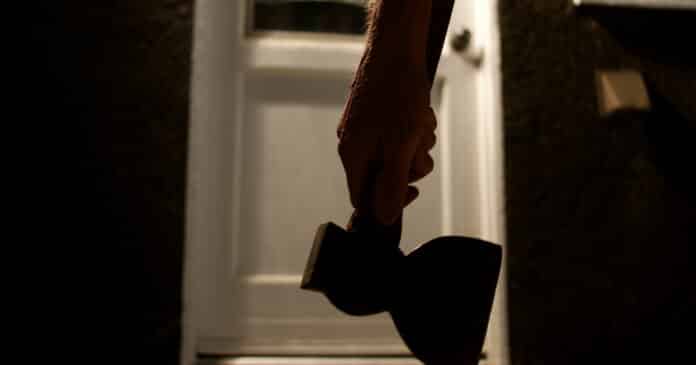 A Wasilla, AK resident got a surprise visitor at her home at about 10:00 PM a few nights back. A 66-year-old man showed up at her home, intoxicated and carrying an axe. He used that axe to force his way into the home, and once inside, he threatened to kill the 55-year-old woman resident.

She was having none of that, though, grabbed a pistol and shot him ending his threats. He was transported to a hospital for surgery to treat his non-life-threatening injuries. The local District Attorney’s office said the homeowner would not be charged. I can’t say the same for the suspect. Whether or not the suspect knew the homeowner was not reported, I would suspect that this wasn’t a random attack.

It’s no stretch to say that people do stupid things they probably wouldn’t otherwise do when intoxicated, whether that be on alcohol or some other drug. One of the difficulties with intoxicated attackers is that it’s very difficult, if not nearly impossible, to talk them down or in any way reason with them.

But there simply is no way that this woman couldn’t take his threats seriously. When you use an axe to force your way into someone’s home and then threaten to kill them, you’re not leaving your victim too many options.

Fortunately, he wasn’t able to hurt the homeowner. But would that have been the case if she hadn’t been prepared to defend herself? While it’s true that the actual odds of needing a firearm to defend yourself are low. It’s also true that if you do need one and don’t have it, the results can be catastrophic. How else is a 55-year-old woman going to defend herself against a drunken man wielding an axe?

Good for her!
The guy is probably a crum-bum & no stranger to the AK justice system. I’m glad for her sake that she didn’t kill him — for most people, taking the life of another person; even a dangerous creep’s life, is a difficult thing to absorb …
Then again, letting him live imposes great costs on society.
The best solution: a quick trial & once convicted sentence him to 30 days on the Kenai Peninsula … unarmed, during Brown Bear cubbing season.

Too bad that she didn’t hit him in center mass and eliminate any chance that he might come back later on for a second go at her. Mental misfits like this guy often don’t learn how to act after just a single slight injury.

When you do dangerous stupid acts with impaired judgement which adversely impacts others whom are sober, you probably should expect some pain at best.

Watch out if you do this bit in Cal/Mexico.
You may end up in the can for defending yourself. And get sued by the thug.
If you ever need to defend yourself. Never talk with 5-0.
Until you have a lawyer with you. Just give your name & ask for a lawyer.
And make them give you the right kind of lawyer. Know your rights & use them.

What a pity she didn’t kill him!

Well, I guess he ‘axed’ for trouble and got it!

As a American citizen, we have the right to defend as lives as our U.S. constitution guarantees it. Stand your ground and protect your life, because law enforcement might not come to rescue you.

You can bet that the mainstream media will refuse to report this story, along with thousands of other similar stories of the use of a gun to save life that happen in the US every year! Of course that same corrupt mainstream media broadcasts the handful of highly questionable “reports” of a very few people who supposedly use a gun for criminal purposes until our ears bleed with their BS! So that must be why they never have time to report any news that would ever be truthful or helpful to the American public… The mainstream media knows the news, and obviously intentionally and with planning refuses to report any of it! That is treason!!!

Like the old advice regarding insurance from the 50’s: “It’s better to have it and not need it than to need it and not have it!”