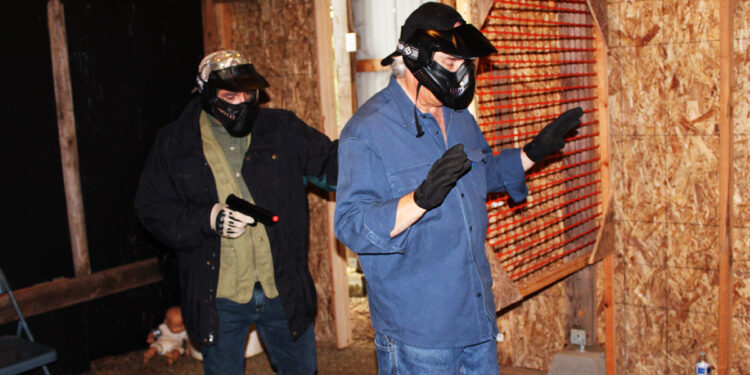 This past month I had the excellent opportunity to take a force on force class with Karl Rehn, a well-known and highly respected firearms instructor based out of Texas, where he runs the KRTraining company and facility. I have wanted to train with Karl for some time now and I was able to do so when he was on the east coast, as he does offer classes at some facilities outside of his own throughout the year.

I took two of Karl’s classes over the weekend, the first being a single-day force on force class named Tactical Scenarios. I had heard a number of good things about this particular course so I was sure to sign up for it early in the year when I saw it scheduled. Force on force classes tend to be few and far between and most of the time they are offered at specific facilities. Tactical Scenarios seems to be one of the relatively few that is occasionally offered in different venues. This class was held at John Murphy’s FPF Training facility Culpeper, VA. After attending I highly recommend this class, and I deemed it worth an article to draw out some valuable lessons I wish to impart to the reader regarding this course in particular, and force on force training in general.

The Tactical Scenarios class utilizes simunitions guns, which fire a paint marking cartridge. Force on force can be done with airsoft guns as well, but simunitions is better and it gets the participant as close as possible to reality in an environment that is still safe. While these cartriges inflict a pain penalty when they hit, they are not dangerous as long as you wear the needed protective gear. It was about 90 degrees and sunny during the class, but despite the heat the participants wore the usual protective helmets, neck guards, and heavy clothing to protect bare skin from the sim rounds. Most of the scenarios were conducted within a make-shift structure constructed to provide walls and rooms, and it worked well for the needed task.

I have taken force on force classes before, so Tactical Scenarios was not new to me regarding this experience, but there were a few things about this particular class that stand out. I think the fact that Karl Rehn is not ex-military or law enforcement may be partly responsible for how well geared towards the armed citizen this class is. Karl lives and teaches civilian concealed carry, and that is what this course focuses on. A lot of force on force classes can wander into the realm of tactical band camp in which weekend warriors can work on their assaulting skills, but this class is not like that in any way. Rather, Karl has carefully constructed scenarios that force the armed citizen to think through problems that are plausible. Some scenarios are also quite outside the mainstream and certainly force critical thinking under stress.

So, let me say at this point that if you get the opportunity to take force on force training with Karl Rehn you should make doing so a priority as in my experience it is likely the most relevant such training to the armed citizen that is being offered. Of particular note, this class utilizes the participants in the role of bad guys, which is a very educational experience. In all the previous force on force classes I have done the instructor cadre or staff have been the sole bad actors. In this class, the students played the role of the criminal actors and I submit that this experience has enormous value as seeing things from the perspective of the criminal is immensely beneficial for the armed self-defender.

With that said, I will highlight some of the essential lessons you can learn in this training experience:

Not Every Problem Warrants a Shooting Solution

I found that Karl does an excellent job of making scenarios realistic in that not every problem requires a shooting solution, again suggesting that he gears his curriculum to the armed citizen. In a number of scenarios that transpired the best decision was to simply let the criminal walk. Circumstances, environment, and the body language of the criminal all serve to indicate the level of threat; will the violent actor just take the cash and flee, or will they start hurting people? Being able to decide between a shoot or no-shoot decision can be practiced well in force on force training, especially if the individual playing the bad guy does so well. Often, taking action at the wrong time is the downfall of the self-defender and good force on force training will teach this. Tactical Scenarios emphasizes this dynamic.

Use of Cover and Barricading in Place Works

Any amount of force on force training quickly teaches the participant that engaging threats in the open, so that the self-defender and bad guy simply exchange fire within close proximity, is a loose-loose situation. Distance greatly aids the better shooter, but at close proximity even untrained street thugs can get lucky very quickly. Engaging in the open is not ideal, and this class clarifies such dynamics in a very effective and realistic way. Using cover, or even just concealment that may not stop real projectiles offers a significant advantage. Along with this premise, the self-defender is almost always better off if they take up a fortified position and let the threat come to them rather than expose themselves to the hostile entity. Karl’s scenarios that he has worked into this class reinforce these tactical considerations at every point.

Even if you have that famed “one-second draw” that many talk about, you simply cannot draw on the drop and get rounds on a threat who already has you at gunpoint before they can shoot you. There may be times when rapid movement, combined with the draw, can work, and certainly, movement directly to cover is often a winning strategy. However, one tactic that quite consistently works, and this class illustrated this point well, is feigning compliance until the right opportunity. Rather than drawing on a drawn gun, complying until a moment when the threat is distracted is often successful.

Along with this principle comes an element that I have seen in previous force on force classes, which is the necessity of covertly drawing the gun in certain situations. However, in this class, I was able to play the bad guy and that experience taught this lesson on a whole new level; seeing what works and what does not from the viewpoint of the criminal truly emphasizes what tactics prove effective and what tactics get good guys killed. A surreptitious draw, in which one can get the gun in hand without the hostile entity noticing, is a game-changer and it is a skill that concealed carriers should be practicing.

Tactical Scenarios with Karl Rehn is one of the best force on force experiences I have had, and I strongly encourage you to seek out such training in general, and certainly this class in particular. This particular training experience is truly geared for the armed citizen self-defender and if you can only get to one force on force event in your training path, Tactical Scenarios is the one to take.

OC Spray – How It Can Help Or Hurt You

OC Spray - How It Can Help Or Hurt You