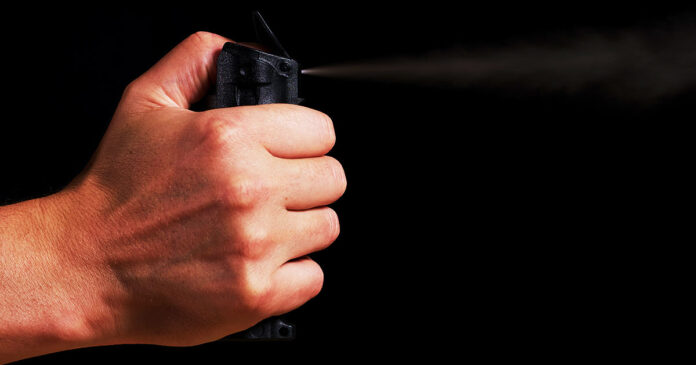 Pepper spray, sometimes labeled as OC spray, is a trusted, non-lethal deterrent against aggressive people and some animals. The OC in OC spray stands for “oleoresin capsicum,” which indicates its active ingredient.

In much smaller quantities, the same thing is in nearly every major brand of hot sauce in some capacity. It causes your mucous membranes to open up and pour out saliva and mucous. There’s also the hot, searing pain that your nerve endings will likely be screaming non-stop until that OC spray is counteracted with milk or a similar treatment.

For someone looking to defend himself from a potential attacker, pepper spray can be quite useful. If the stream of capsaicin-laced liquid hits the eyes, nose, or face, you’re virtually guaranteed to have an impact. The result can cause your attacker to be temporarily blinded or even flee.

So, what’s the downside?

With any weapon, there are advantages and disadvantages to its use. OC spray is no different.

Where OC Spray Is Most Effective

In a violent encounter, when an opponent is closing in for his attack, OC spray has the opportunity to place your attacker at a severe disadvantage. If you can spray him in the face before he is within distance to grab you, you can mess up his chance to grab hold and pull you into a fight.

OC spray can also be effective when fighting a group of people. Whereas you may have had to fight against two or more attackers, you can steadily reduce the number who can actively pursue you. If they can’t see clearly, they can’t chase after you as effectively.

And the last, great application for OC spray is a bit of a dirty trick. If your back is up against the proverbial wall and you’re forced to fight, a good dose of pepper spray to the face will allow you to then press your attack with another weapon.

For instance, if you were stuck in a closed alleyway and two attackers were approaching, and you had a rock and a can of pepper spray, you could spray your closest attacker in the face. Neutralize him with the rock in whatever manner you see most expeditious — a quick blow to the crown of the head, or the nose, jaw, anything that’s exposed and accessible. Now you only have to deal with one attacker. Ideally.

This brings us to the downside of pepper spray — where it is not effective.

In a self-defense situation, if your attacker gets hit in the face with OC spray and then gets his hands on you, he’s not likely to let go. If his adrenaline weren’t already racing, it sure would be after the searing pain of capsaicin is coursing in his mucous membranes. This will definitely invoke his most violent nature if given an opportunity to do so.

And then there’s a factor of wind or blast back. Blast back is when droplets of the spray reach back and hit you. While you won’t get nearly as bad a hit as your attacker, you will undoubtedly feel quite a distinct, searing burning sensation across any exposed mucous membranes.

Depending upon OC spray to end a fight before it begins is foolhardy. If it works — be thankful. If it doesn’t, you’re going to have to settle in for a fight. Depriving your opponents of their ability to see you clearly is the first step to gaining the advantage you need to secure your escape. But do not depend upon it as a sole means of defending your life from assailants.