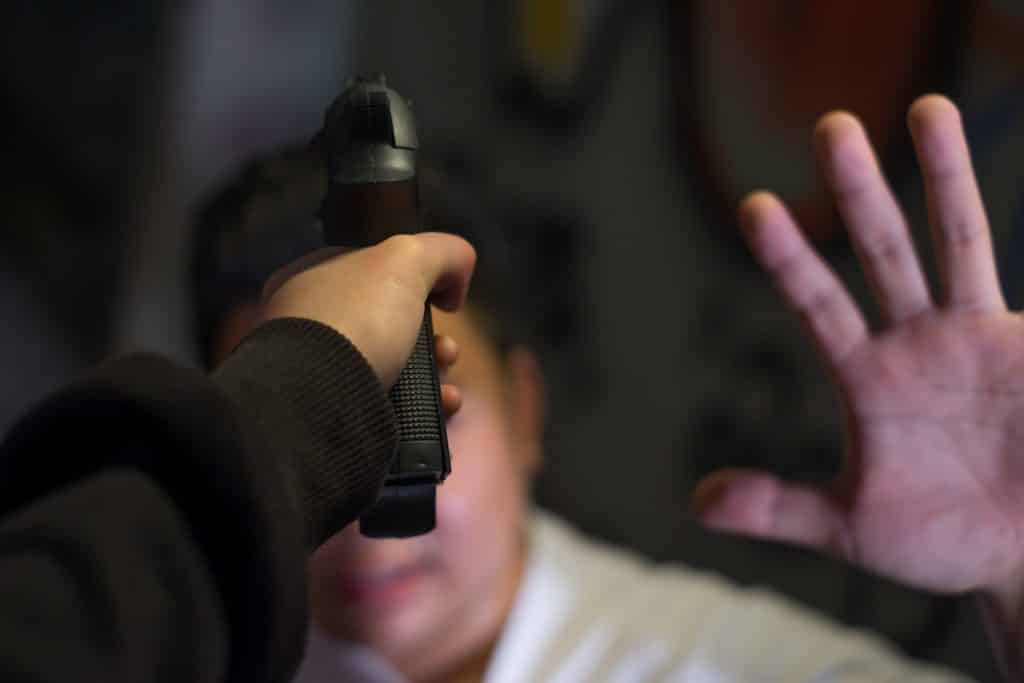 This isn’t poking fun at Gear Rangers. They dress the part. They come prepared to operate.

However, by gear alone, a concealed carrier does not make.

Recently, I got to see a high-end defensive pistol course that incorporated role play and blue guns to simulate the real obstacles that concealed carriers run into. The following are students who were in the course but described to a T total opposite approaches to concealed carry. This was Day 4 of the class when two dudes were put through two scenario drills: gas station robbery and parking lot robbery.

The concealed carrier, a student, would be selected and told to go do a list of things at the gas station. The instructors would write down a random list like “pick up eggs, milk, and fill up the tank of gas.” The concealed carrier would then have to navigate those routine tasks, being aware of his surroundings, and try to complete the exercise using some of the principles covered in the class.

I wanted to write down what they did so the readers could see how different levels of training, gear selection may or may not play a role in survival in a bad situation. These situations are not reflective of ALL real life situations but they were certainly educational.

Daily carry: P30SK sub-compact, chambered in 9mm with two 10 round magazines in reserve.

Wears Carharts, ball cap, gas station shades. Got a used M&P Shield 9mm at a great rate down at the local gun shop. Took a beginner’s level pistol course that met his state’s guidelines for the concealed carry application. Typically shoots twice a year. Doesn’t carry a backup magazine. Has a manual safety on his pistol and doesn’t always carry with a round in the chamber. Wife made him take the class. To his credit, though, he was more than willing to be fodder for instructors.

Daily carry: M&P Shield with a standard 8-round magazine

At 10:35 p.m., a hardened but inexperienced young criminal scouts a guy that pulled up to the gas pump. Using a stolen handgun, the bad guy approaches with the vehicle in between himself and the target to obscure his approach. His palms are sweaty. He grabs his pistol out of the fold of his hoodie sweatshirt, takes one last glance to his left and right, and then pops around the corner with the pistol drawn and pointed at the victim’s head. In a loud, angry voice, the robber tells the victim to put his hands on the car.

For reference: the robber, in this scenario, was another student but was under the supervision of the instructors and was using a blue gun. The scene was inspected prior to running the scenario. The students were not informed how or if a robbery would transpire, only that they should maintain their situational awareness and react like they would in real life (minus any hand-to-hand combat).

Despite the initial surge of adrenaline from seeing a pistol pointed at his head, Stealthy Operator Mike is able to gather his wits enough to keep his hands visible. Realizing his next actions could quickly decide his fate, he makes subtle reassurances to the robber before the robber pushes him up against the car. The robber reaches for the man’s wallet. Receiving no initial resistance, the robber grabs the wallet and the phone but completely misses the pistol located at the appendix position on the waistline of the victim. Realizing other (students) bystanders were around and could see him, the robber quickly stops his search.

Getting his wallet and phone, the robber backs away and then breaks contact. Player 1 was unable to draw his pistol to defend himself but also didn’t lose his pistol during the interaction. He was robbed but didn’t get hurt.

Joe got robbed walking up to the counter of the store to make his purchase. Because the student robbers were told to only strike when they saw an available opportunity, the robber saw his opportunity when Joe was purchasing a can of soda. Joe had his back turned, even though he was passively scanning to his left and right. That was good enough. The robber stuck his gun to the back of Joe’s kidney and then announced it was a robbery.

The clerk, me, hit the ground. Two other bystanders ran off, one called out he was calling 911.

Joe, definitely more inexperienced than Mike but nevertheless brave, juked the robber behind him and attempted to draw his own pistol to engage the robber. Unfortunately, the robber didn’t get juked nearly enough to not be able to fire off several sims before Joe was on target and firing his sim rounds.

Both Joe and the criminal were hit several times. I’m not a medical doctor but I’d say both hit each other critically.

Instructors then stopped the scenario.

One thing that was quickly apparent to me was that the individual items of gear — the holster, the belt, the clothing — all seemed to have far less impact than the mental and physical conditioning of the individual. Joe wasn’t fat or out of shape but he most certainly wasn’t mentally prepared to accept that a guy behind him with a gun pressed into his kidney is going to be juked enough to not be able to put rounds on target. Joe was pretty damn fast for a guy who never practices. But he wasn’t quick enough to avoid likely catastrophic damage.

Granted, the “criminals” in this class were students. Students were chosen to be criminals in this course because their average level of experience was thought to be likely the same or slightly better than any armed criminal. The fact that the criminals both used their situations to their advantages to maximize their control of the situation arguably put both concealed carriers at a considerable disadvantage.