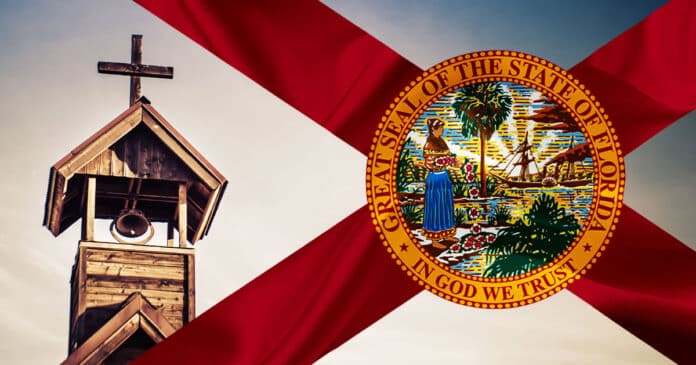 Previously in Florida, concealed carry was permitted in church buildings but the prohibition on carrying on school property prevented churches sharing school property or running a daycare, or operating a parochial school from allowing church members to carry during services.

This new law, HB259, removes that restriction so churches are now allowed to decide on their own if they want to allow concealed carry regardless of whether or not a school is associated with the ministry.

Many churches of course have their own associated school or daycare and now they don’t have to automatically be a gun-free zone because of that.

From Gun Owners of America:

With HB 259 now signed into law, religious institutions are no longer automatically listed as gun-free zones by the state if they choose to offer daycare services, run a parochial school, or rent/lease space from a school to hold services.

Religious institutions are now free to make that choice on their own if they wish to be gun-free zones.

It was your hard work and effort on pressuring our lawmakers that got this bill passed. Thank you!

We at Gun Owners of America felt that Florida’s lawmakers could have done much more than what was offered in this bill. While we support this bill and fought for its passage to become law, the legislative leadership has been a let down to Florida’s gun owners since there were solid pro-gun bills like Constitutional Carry (HB 123), and they did not allow that bill to advance.

I know this news is hard to hear, but Florida is in a bad spot at the moment in regard to the advancement of gun rights.

Florida is a state with 102 Republicans holding a Supermajority in the legislature. As such, you’d think this state would have pro-gun bills flying through and reaching the Governor’s desk in record time.

Alas, it took over sixty days for the Legislature to even send such a bill like HB 259 to the Governor’s desk, and it took years to get such a small change in Florida’s gun laws to advance through the legislature.

By contrast, Texas pushed Constitutional Carry and a legitimate Second Amendment Sanctuary bill through their legislature and got it to their governor’s desk. The Lone Star State even went a step ahead and passed a bill that says a Texas-made suppressor is not under the purview of the ATF and the National Firearms Act.

Yet Florida has more Republican lawmakers in office, per capita, than Texas does. One would expect more from our legislature. But Florida’s Republican lawmakers were unable to pass Constitutional Carry through its first committee, let alone the entire House and Senate. 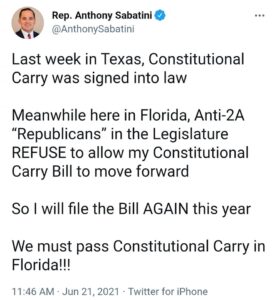 Florida’s gun owners need to be loud and vocal.

The squeaky wheel gets the grease and, so far, we’ve been squeaking by but getting no grease.

I need you to be LOUD AND PROUD as gun owners. We need to tell Gov. DeSantis and the Legislature that you want Florida to be the “Gunshine State” once more.

As your state director, I amplify your voices in Tallahassee. The louder you are, the louder I can be!

So we need to get organized and active for this next session. We need to flood the Capitol and show lawmakers that we will not be silent.

PS. On July 1 at 4pm, I’ll be on the Mark Essen show. You can listen live here. Also, I was a guest speaker in Polk County on June 28, you can listen to my speech here. It starts around the 9 minute mark.

SC needs to pass a similar bill, IMHO. This year a bill to legalize open carry and remove the fee for the carry permit was passed, and both are things to be sure. But in SC your carry permit does not apply, at a daycare center, at a facility where medical services are rendered, at a school, on a college campus, aboard public transportation, or in any publicly owned building. So basically while SC will issue you a permit and not charge you a fee for doing so, the permit is rendered useless by all of the location restrictions.