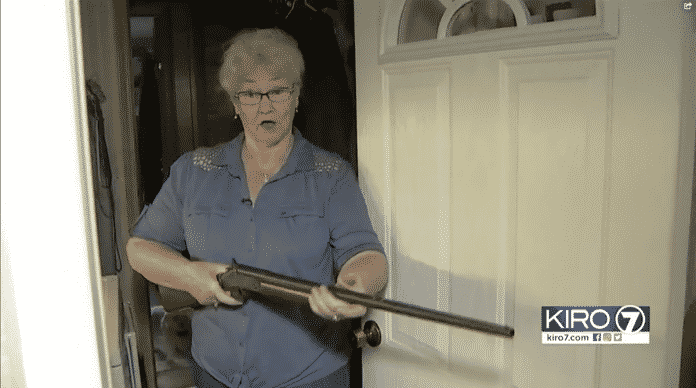 A 78-year-old Spanaway, WA grandma got quite the surprise on a recent Sunday night. Her dog started barking, alerting her to a potential problem on her porch. The woman walked to the door and opened it to see what started her dog barking.

When she opened the door, she saw a man standing right there, about two to three feet from her. After they stared at each other for a few seconds, he turned to leave, but she said, “Oh no, you don’t. You stay right there!” Then she said:

“I reached over and got my shotgun. And I cocked it, and I told him to stay right there. Told him to go sit on the steps. I followed him out, and I just stood here with the shotgun waiting for the police to come.” via KIRO7

The shotgun grandma used was a break action hammer fired single shot that she admitted she had never used before. It was behind the door she had just opened, which is not an ideal place to stage any defensive gun. You want that in your hand as you are dialing 911 and staying away from the door.

When she demonstrated what happened for news cameras (NEVER a good idea), her definition of cocking the gun was just simply closing the breach. Did she realize that she also needed to cock the hammer back?

The suspect was arrested and told deputies something about looking for his wife. Perhaps he just had the wrong house. The suspect did not show any signs of impairment and was later released when the homeowner decided not to press charges.

She went on to say, “After he was so meek and mild and sat down like I told him to do? It was empowering. I felt like at least I was in charge. I wasn’t afraid.”

I am truly grateful that everything worked out fine for this woman, but she would have been in big trouble if this had been an aggressive intruder.

If you suspect that there is trouble outside your door, the last thing you want to do is to blindly open it to see what or who is out there. A violent intruder would have just pushed his way in at that point, and the homeowner would have been more or less helpless because her shotgun was behind the door.

Before she did grab her gun, the intruder was already headed for the door to leave. She ordered him to stay. Another bad idea, but this suspect was apparently completely submissive. That’s not usually the case, of course, so if an attacker decides to leave, do everything you can to encourage that.