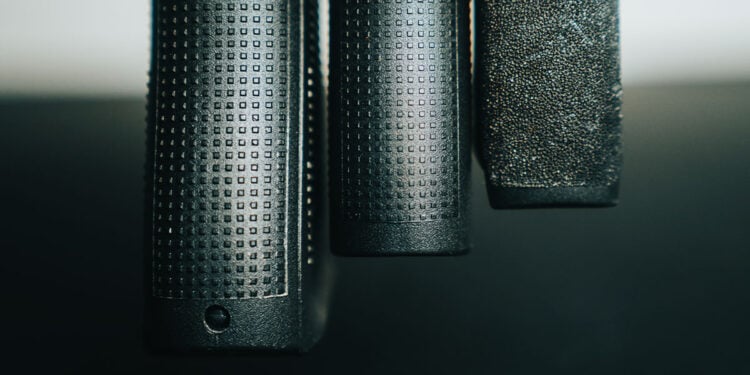 There is no denying that the key foundation on which to build handgun skill is a solid grip. Trigger manipulation is often proclaimed as the most essential, and this is arguably true, but a good grip facilitates recoil recovery and serves to offset the movement placed into the gun by the trigger finger. The single factor that seems to be universal to top shooters is an excellent grip technique.

With that said, how much does the actual hardware effect shooting performance, in particular, pertaining to grip? Like most athletic pursuits, it is the Indian and not the arrow that truly matters. A good shooter will, typically, shoot anything well and a mediocre shooter will struggle with any pistol. However, the grip of the gun, and the way it interacts with the individual shooter’s hand, has a significant influence on performance.

All individual shooters have slightly different hand sizes and shapes. As should be no surprise, different guns suit different shooters better or worse, depending on a number of factors, but the grip circumference is specifically important. A grip that is too large for the person’s hands, or too small for it, will cause issues. While a skilled shooter can make the best of the situation, and likely still perform well, it will not be optimal if the gun is simply too large or too small.

Small Guns and the Concealment Compromise

Almost all concealed carriers will make certain compromises in their carry gear, and most will, at least occasionally, need to carry a small gun that will have a small grip. Concealment needs may simply trump optimal performance much of the time. In this regard, skilled shooters tend to give up much less performance than do inexperienced shooters as the solid skillset can be leveraged to optimize performance on a sub-optimal handgun platform. Small grips, as found on the tiny pocket autos, tiny revolvers, and even some of the single-stack or new “stack-and-a-half” type autos, can be challenging to shoot. In large hands, these tiny guns tend to fish around more than a gun with a full-size grip. Recoil is often perceived as being much more snappy due to the smaller surface area of the grip. Small guns are more challenging to shoot well for most shooters, and the tiny grip is the foremost reason for this.

However, when dealing with small guns, we come back to the concealment compromise. The sub-optimal performance offered by a particular gun for a particular shooter may well be overlooked in favor of a gun that can be carried and concealed when other larger and more shootable options won’t work. It is quite common for even good shooters to give up at least 10% of their overall performance speed and accuracy when going from a full-size gun to a small, deep concealment gun. Most would argue, as would I, that going armed with a gun that you can’t shoot quite as well as your primary gun is still better than the alternative of not carrying at certain times that you can’t make the larger gun work. The life of concealed carry is often a compromise and the sacrifice in performance is baked in when utilizing tiny guns.

When using full-size pistols you will also find that grip size makes a significant difference. The most obvious example of this that comes to mind is the large bore Glock pistols. The early Glocks that were chambered in 45acp were notoriously large. Most people found the grip to be too wide to utilize comfortably. The truth is, even the standard frame Glocks tend to be thick compared to many of the more modernized striker-fired guns, and they simply do not fit the hands of many, despite the fact that Glock has remained the genre-defining pistol of striker-fired guns, the most popular handgun type.

Many modernized variants of the polymer-frame striker-fired pistol are designed with thinner grips to begin with, and also incorporate changeable backstraps or grip modules that allow the individual to customize the size and feel of the grip. The truth is that, at this point, there are many brands and models of pistol that are very reliable and widely supported. As such, individual shooters should use what works best for them rather than adhere to brand loyalty. This is not to say that Glocks don’t work, as many shooters find that they fit the hand well, myself included, but it is not the only option in the polymer-frame pistol market at this point.

The Problem with Too Large a Grip

Obtaining a solid grip on the gun when it is still in the holster is essential for an efficient draw and presentation and a gun that has too wide a grip surface for the user makes doing so difficult. The grip must often get re-adjusted when the gun is presented if the size is unmanageable for the shooter. Likewise, if the hands struggle to get a solid grip due to the large frame size of the gun, there will be no consistent stability when the gun recoils. The gun will move around during shooting sequences and the shooter will need to readjust grip between shots. Hardly optimal. Again, we will see a drastic difference in this grip size influence between good and mediocre shooters, as good shooters can force things to work better than those lacking experience. Still, even a good shooter will simply be able to perform better if they are not fighting the gun, so choosing a grip size that works best is beneficial for all shooters.

When a gun has too wide a grip for the individual, trigger finger placement becomes an issue. I have seen shooters that have small hands, while using large frame guns, struggle to reach the trigger at all, often only able to place the very tip of their index finger on the trigger. This, of course, does not work well. There are no hard and fast rules as to where the trigger should fall on the finger; many good shooters use the pad of the finger, and many use the crease of the first joint. This decision should be made based on what provides the most direct, rearward travel of the trigger, relevant to the size of the individual’s hand compared to the size of the gun. However, a gun that is too large for the user’s hands will not allow for optimal trigger finger placement and will always pose this challenge.

In closing, grip size does, indeed, matter, and I encourage shooters to utilize a handgun that fits them well rather than use a gun simply due to brand loyalty.

80-Year-Old Tenn. Man Survives Shootout Against 3 Car Burglars at 3 AM