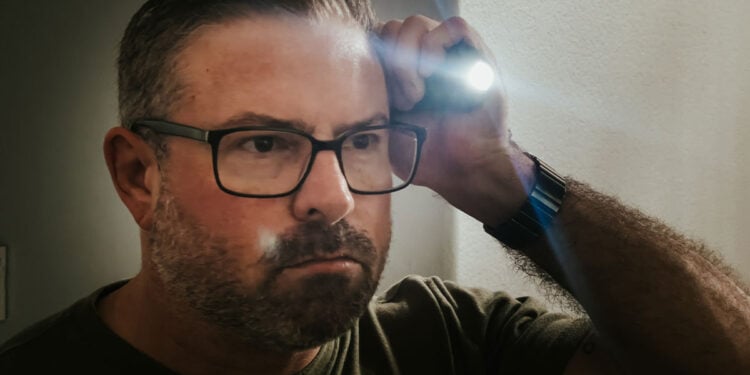 There is an entire industry devoted to shooting with artificial white light. Night shooting certainly has a “cool factor” going for it, we might consider it a higher-level training than standard range work. Like all aspects of shooting, the techniques and tactics involved in shooting with lights have changed over the years. As light techniques have evolved, there is an observable trend; the techniques used have, in the past few years, been simplified, and this is a good thing. Rather than utilizing many convoluted methods, a stripped-down application of only what techniques are necessary is the right approach to shooting with light.

Years ago, I dabbled with all of the different handheld light shooting techniques that were being taught at the time, and the focus was on different ways to hold a light and a pistol for the best shooting application. Most of these techniques involved tying the gun and the light together in some capacity so that the support hand could assist in the shooting process to some extent, even though it was holding a handheld light. While there is merit to this approach, as almost all shooters can shoot better with both hands on the gun, the application of these techniques did not make sense when in the context of the overall situations that might actually involve the need to shoot with a light. Especially as it applies to concealed carriers, simplicity is best.

Giving credit where it is due, I first picked up on a “simplified” approach to shooting with a handheld light from well-known instructor Mike Seeklander, who emphasized the use of the light in a cheek, or temple, index hold that does not tie the two hands together. Such an approach simply makes sense when considered in the context of what really happens in a dark environment pertaining to self-defense, especially as it relates to armed citizens. Recently, I took a low-light handgun course with Steve Fisher of Sentinel Concepts, who is a well-respected low-light instructor in the industry, and Fisher also focused primarily on the simplified techniques of using the light independently of the gun, though he also teaches a number of useful variations on the well-established Harris light technique.

First, to clarify, this article focuses on the use of a handheld flashlight rather than a weapon-mounted light. Quite frankly, a weapon-mounted light is a great addition to a dedicated home defense gun but hardly necessary for a carry gun. What is entirely necessary for concealed carry, however, is a good handheld light. If you can carry a gun with a light on it, then it is a nice to have feature, but you must still carry a handheld light. The reasons that the handheld light trumps weapon-mounted lights should be obvious; you can’t point a gun at things you have not yet identified in the dark. The vast majority of times, a light may be needed in a dark environment, will not involve shooting, but will always involve identifying and possibly de-escalating potential danger. Therefore, the handheld light is an essential tool for carry.

The most useful handheld light technique for a civilian concealed carrier is one that holds the flashlight in a check/temple index position, where the light is roughly at your temple/eye line so that the beam will both illuminate the target and your handgun sights. Now, before people get hysterical about the fact that the light might be a bullet magnet and having it next to your head is bad, I would suggest that any technique that allows you to actually shoot with a light will place the light near some vital part of your body. The Harris, and other techniques that tie the light and gun together, put the light directly in front of your heart, so is that much better? Yes, bad guys might shoot at the light, but in the daylight, they will just shoot at you, correct? The fact is that, under the very unusual circumstances that a civilian would need to fight with a gun and a light together, the light might indeed invite gunfire, but targets need to be identified. Shooting at shadows in the dark is not acceptable, so the risk is simply necessary.

The primary reason that a check/temple index position for the light is the best go-to technique for the citizen is simply due to the fact that, realistically, if you have to shoot with the light, you will be transitioning to shooting with the light directly from searching with the light. Example: if in a dark parking lot you suspect that someone is stealthily approaching you, concealed in the night, would drawing your handgun and lighting that location up with your weapon-mounted light be appropriate? Also, ask, would drawing your handgun and handheld light simultaneously, and tying them together in the Harris technique or something similar, be appropriate? Even if searching for a possible threat in a dark house or building, techniques that tie the gun and light together result in pointing the gun at everything that the light illuminates. This is simply unacceptable for the armed citizen.

Reality and legality dictate that before pointing a gun at any suspected threat, positive target identification is required. Therefore, the light will be in play first. Searching with the light is best performed with the light in a hammer fist hold so that you can work the tail cap with your thumb; this gives you the ability to elevate the light over your head to foster good throw of the beam, and it also gives you the ability to defend yourself with the light as a good impact weapon at contact distance. Searching can be done well with an “FBI” style technique that separates the light away from your head. In the event that a threat is spotted and identified as such, the most efficient way to bring the gun to bear is by drawing the light into your temple while drawing the gun. This technique is faster and more efficient than would be going to a technique that ties the light and gun together.

The Need for an Alternate Light Technique

The temple index light hold will likely accomplish any needed task in which a citizen would need to shoot with a light, but there is a circumstance that would demand the use of a second technique, and that is the need to shoot around a strong-side barricade. If you need to shoot around a wall, if the edge of which falls on your dominant gun side, then the light would be pointed right at the wall when held in the temple index. Therefore, a light technique that puts the light on the other side of the gun will allow you to use the light to illuminate what is past the wall. The Harris technique works especially well for this.

Regarding the skill of shooting with a handheld light, simple is best. The temple index hold for the light, which can be instantly executed from search mode with the light, will accomplish most of anything that the concealed carrier would ever need to do with a light and gun in hand. A secondary technique that puts the light on the opposite side of the gun to foster barricade shooting is also in order. These two simple techniques provide everything necessary.