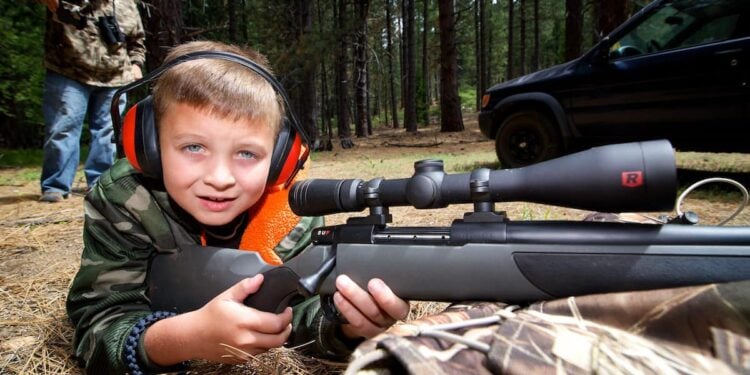 A lot of gun owners are worried about young, curious kids getting a hold of a gun. Make no mistake, your guns are always your responsibility. In this article, we will give you some pointers on how not just to keep your kids away from guns in the home but also work with them to develop that relationship between you, them, and the firearm. This will be a constantly evolving relationship but it’s best to begin now.

Here’s two basic solutions to keeping your guns in your control at all times while you’re in the house:

If you do these two things, you will significantly reduce the possibility a child gets his hands on your firearms.

As a very young child or infant they won’t have a lot of cognitive ability to understand the inherent risks in firearms, this is the stage of the game where you have to keep them out of sight unless they are physically on your body and you retain control over them. A gun isn’t a toy but it’s also not some magical thing that goes off on its own. It’s a tool. A tool within your control and yours alone. At this stage of a child’s development, that needs to be established as early as possible.

As that child gets older, expose him or her to the fact that there are guns and those guns are meant to be handled by adults. Getting to see the gun being used responsibly at the range let’s the child make a connection between gun, action, and effect. This will likely urge on the kid’s own curiosity. As soon as that curiosity emerges, it’s time to show your child how a gun is used. And it begins with the four basic rules of firearm safety.

These four basic firearm rules seemingly elude quite a few adults but many children pick up on them quite quickly.

This relationship between firearms and your children needs to always include you. You are the biggest influence on your children and your guidance in their curiosities will help them gain an appreciation for guns as the tools that they are — and treat them with the respect they are due.

There’s two major strategies in storing a firearm — locked safe and concealment. Hiding a gun is actually a pretty bad idea for deterring a child’s interest in the gun. If the kid knows where the gun is and knows he or she needs your approval prior to accessing the firearm, that will be a lot more effective than hiding a gun.

Think about it from the perspective of when you were a child. When you were young, you know it was around your birthday or Christmas and you knew where your mom or dad hid their presents. You likely had your home mapped out and knew, eventually, where everything was hidden. Your kids will likely have that same inquisitive desire. Hiding a gun is not an effective long term solution.