You have been packing that pretty pistol around for a while now. You may also be carrying an offside magazine carrier and possibly even a clip on “survival knife”, flashlight holder, and cell-phone case. All the necessities of a concealed carrier’s life and all possibly carried on a belt.

Regardless of how well made your gun belt may be, there is this pesky thing called “gravity” that makes men’s butts disappear and bellies to drop; at least that is my theory. Gravity also causes belts to move downward; especially when there is a modest amount of weight attached to them. In fact, some folks will not carry their favorite weapon of choice simply because it is too “heavy” to carry and the weight of the weapon would be a burden.

Our everyday belt has grown from a simple device to keep the pants up off the ground to a utility belt that would make Batman envious.

While working in law enforcement, my utility belt consisted of a duty holster and “personal protection tool”, double-pouch magazine carrier, radio carrier, mace carrier, double-handcuff pouch, flashlight holder, PR-24 side-handle baton carrier, a pouch for protective gloves, folding knife pouch, and stun gun pouch. Since I had very little space left to work with, I wanted to add a holder that would hold a 16-ounce cup of coffee and powdered sugar donut but the chief would not let me. Instead of my idea, a Taser holster occupied the spot. The “Duty” belt, when worn, attached to the inner belt with “keepers” that would keep the duty belt in place. Unfortunately, there was no means to keep the inner belt in place except for the butt, hips, and constant upward grabbing of the belt when I had to exit a company car. I hated foot pursuits! No wonder I have back problems!

Today, life is simpler and I am normally found just carrying my EDC tightly concealed IWB with a double-magazine carrier and sometimes, but not always, a TDI Law Enforcement Knife that clips onto the belt. Even with carrying minimal equipment, the effects of gravity still presents itself and without a good support system, my favorite carry would sit much lower than it does.

Several years ago, I swallowed my pride and opted for a pair of suspenders. Suspenders are now (mostly) part of my daily wear for work and casual use. I rely on them to help “support the cause”. 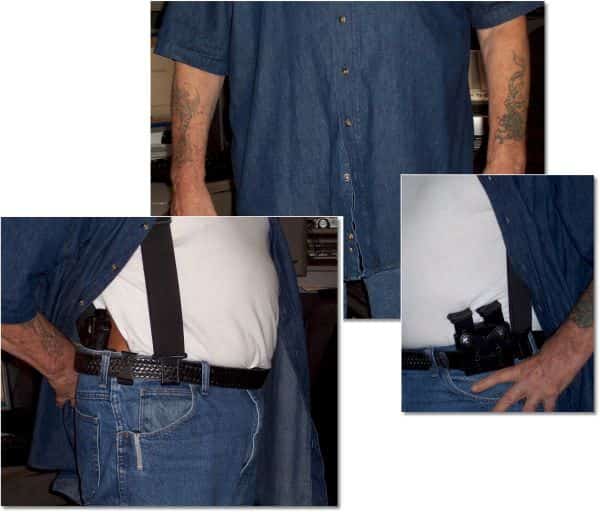 Suspenders (or “braces”) have held many a pair of pants up for quite some time. First invented in 1822 by Albert Thurston, the wearing of suspenders was almost universal due to the high cut of mid-nineteenth and early twentieth century trousers, a cut that made a belt impractical. After the First World War, as men became accustomed to uniform belts, suspenders were still standard throughout the 1920s but were not as popular. Men switched to belts during the 1930s because of the suspender’s image as underwear. Suspenders endured; however, and are regaining popularity in business attire and as social statements by those younger than I remember being.

There are several types of suspenders available from those that clamp onto the top of the trousers, to those that attach to buttons sewn into the trouser tops, and those that wrap around the belt. My preference is the latter and I have several pairs for different occasions. I wear them outside the shirt and inside the shirt, depending on how I want to present myself. Most often, I wear my shirts outside of the pants and wear the suspenders inside the shirt to help support the (gun) belt.

Of the many brands available, Perry suspenders in 2″ width remain my favorite. They have a unique feature; the patented Perry Hook, which hooks beneath the belt. The Perry Hooks eliminate the problems associated with other types of suspenders while giving you the security and comfort that suspenders should provide. Wal-mart carries reasonably priced (around $9) Perry suspenders or you can find them at here. I have worn the same pair of Perry suspenders for over two years and yet to have any problems with them except for an occasional “cinching” up as the material stretches. They have been a worthwhile investment.

I have some tell me that wearing suspenders and a belt is a “fashion faux pas”. I never was much into fashion anyway so to tell me that is a “faux pas” on their part. Aside from your own sense of fashion, there is nothing wrong with wearing suspenders. For the armed citizen, suspenders help support the firearm when carried on the person. At times, I carry my favorite firearm in a Smart Carry holster worn strong side or left-side appendix position (cross draw) instead of the intended groin position. The belt helps to keep the holster (and firearm) in place and the suspenders help keep the pants in place.

Regardless of whether you carry IWB, OWB or in a pant pocket, suspenders help to keep things from sliding south and, after all, you are not one to be caught with your pants down.

ordering a couple of pair right now, thanx a million!!

Currently I wear a pf9 in a supertuck delux, a leatherman multitool, my cell phone, and some “work” equipment all on a 511 tactical operator belt.  It really does an amazing job but I think it wouldn’t hurt to have a little help sometimes.  Thanks a million for the informative article.

When the fashion police chide them about wearing a belt and suspenders, ask them how well a belt would work on the lower third of a basketball. That’s my issue, anyway, and why suspenders are a must for anybody with a somewhat spherical body profile.

Been wearing Perry suspenders since they first came out.  Have several pair, different colors, and can even launder them.   In years past when I was wearing a duty belt, I wore suspenders that had a fastener like a garter belt that hook over a button sewn into the pant belt area.  You could hook the supenders by usiing the “keyway” fasterner thru the shirt onto the button.   I don’t have any hips (but a lot of stomach) so I wear suspenders all the time.
Thanks for the article.  If brought back fond memories.

I have been wearing suspenders for many years, even before I started to carry. And yes with a belt with many comments from the so-called “Fashion Police”. My wife has been trying to get me in shape saying that it would help with the gravity issue and I ask her “What?….Pear IS a shape” All kidding aside, I’m in total agreement. I carry either a PF-9 or XD SC 9mm, extra mag pouch, cell phone and at times a SOG multi-tool or something similar. Without suspenders I would be singing “Pants on the Ground…”

Last year I had the same problem. In lieu of suspenders, I found the answer and started my business entirely around the perfect gun belt that looks like a snazzy leather designer dress belt.

The Galco Miami Classic Shoulder Holster System eliminates the need for a belt entirely. It provides a means to carry your pistol and two spare magazines. If you prefer you can configure the off side for a backup sidearm, or a single magazines/flashlight combination.

I wear the perry suspenders under my shirt all the time. When using the suspenders I don’t have to cinch up my belt so damn tight that it cuts off my breath. I carry a compact 1911 with an extra mag and a tactical knife all on my belt.

I wear the perry suspenders under my shirt all the time. When using the suspenders I don’t have to cinch up my belt so damn tight that it cuts off my breath. I carry a compact 1911 with an extra mag and a tactical knife all on my belt.