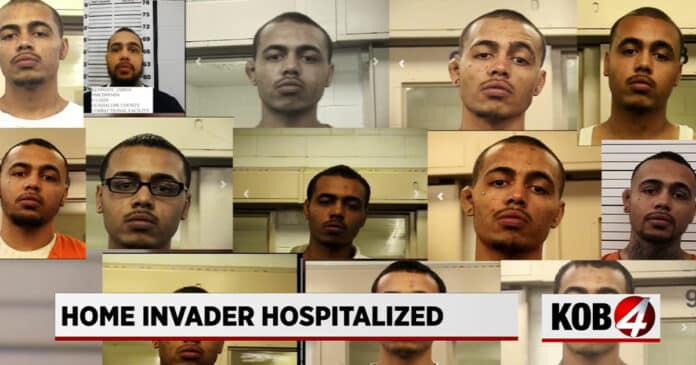 James Kennedy of Albuquerque, NM, is being charged with robbery and kidnapping after forcing his way inside a couple’s apartment with a gun.

Kennedy threatened to shoot a man before hitting him on the head with the gun, then forcing his way inside the apartment, according to court documents. The man’s girlfriend hid in the bathroom. Kennedy demanded the couple’s belongings and car keys as well. He then left the apartment for a moment and found the man of the apartment armed.

“He raised his pistol as the male ran at him and in fear for his life… he fired multiple shots at the male,” investigators said. via KOB4

The man fired seven shots and he began hitting the invader with the pistol, and the invader was trying to take the gun from the man’s waistband.

Kennedy then fled from the apartment to his mother’s house, where he refused to say how he had been shot. This led to his mother calling 911 and getting him hospitalized, thus bringing forth his charges. Kennedy is also a repeat offender, with 12 mugshots having been on file with the Bernalillo County Sheriff’s Office.

Compliance will not always guarantee a safe way out of trouble, but it worked out for this man and his girlfriend. With Kennedy being a repeat offender, things could have gone a whole lot worse for the man, as he might not have survived. Thankfully he was allotted the right amount of time to grab his weapon somehow.

When it comes to home defense, if you feel you should be carrying your weapon on your person when inside, then by all means go ahead, it is your home. Make sure the other people that live there know where your weapon(s) is located in the case of an emergency as long as they are old enough and responsible enough to handle firearms. Also, you should be ready to use an extended amount of ammo, as was the case here even just to disarm one invader, as every shot fired is not a guaranteed strike, and that the one being fired at will not always go down without a fight.

Ultimately what you choose to lock your weapon for home defense is your own decision, but it would probably be best to have something that is at least accessible in a timely manner. Every second counts in home defense, and you must take advantage at any moment possible.