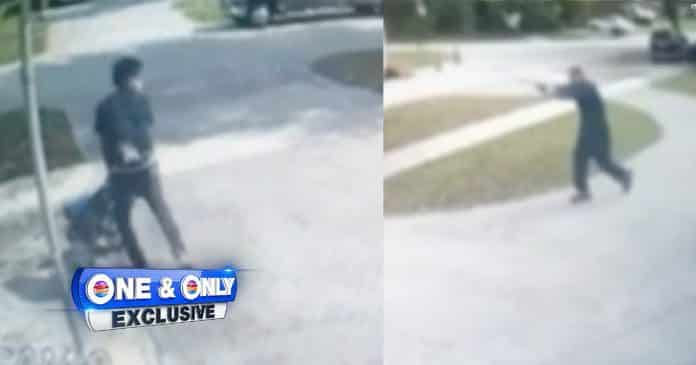 This one has a home surveillance video that clearly captures the crime and shows the homeowner’s armed response.

In broad daylight, two young men are seen walking down a sidewalk in front of the victim’s home. One of them quickly walks into the victim’s carport and wheels out an expensive pressure washer. The homeowner sees this and confronts the two robbers verbally and with his gun pointed at them. They appear to be perhaps 25 or so feet away.

In a local news report, the homeowner discussed the incident with a local news reporter. He said that the robbers became verbally aggressive and didn’t know if they were armed, so he shot one of them. The one that was shot ran to a nearby car dealership where he got help for his injuries which were not life threatening. The other burglar fled the scene and has not been found.

This is one of those stories where it looks like it all worked out well for the victim defending his property, but this is not a good example for other responsible gun owners to follow.

I cannot say this enough times. It is not legal to use deadly force to defend property. And since this crime occurred during the day, it wouldn’t even be legal in Texas.

Both the victim’s own words and the video show that he used his gun to defend mere property – a pressure washer. He said that he didn’t know if the suspects were armed, and that’s why he fired on them. Verbal threats from 25 feet or so away with no evidence of a weapon (police recovered no weapon) constituting a deadly threat could be a pretty hard sell. He also said he wanted other bad guys to take note.

Essentially everything this homeowner said to the press could be used against him- defending what he’s worked hard for, not knowing they were armed, and indicating he would do the same to other robbers. At no time did it appear, or did he say he felt that his life was being threatened, just that he wasn’t sure about a weapon which would seem to say he fired preemptively.

This also cannot be said enough times. Never talk to the press about the incident, and don’t give a statement to the police without your attorney present. In my opinion, which of course doesn’t count in Fort Lauderdale, this homeowner gave prosecutors everything they would need to charge him if they choose to do so. Perhaps the reason he might not face charges could be because the suspect was not seriously injured or killed.

All this said, I have no doubt that this man believes that he did the right thing with the right motives and that he would be totally shocked if he found himself charged with a serious felony. But this is why it is so important that all gun owners know the law regarding self-defense and the specifics of the jurisdiction where they live.

Firearms are only for self-defense, not stuff-defense.

My wife and I were watching an old “Murder, She Wrote” last night and as the young suspect was being interviewed by the police, I kept saying, “He should not have said that to the police.” Must have happened 3 or 4 times in just a few minutes.

Where did I learn that? From reading USA Carry articles like this one!

And this is the reason why the “alpha sheepdog macho bravado” needs to be nipped in the butt. People need to stop taking the law as black and white, as well as stop believing that because they have a gun they can take another’s life whenever they feel of being wronged. Too many wannabe George Zimmerman’s in the gun community.