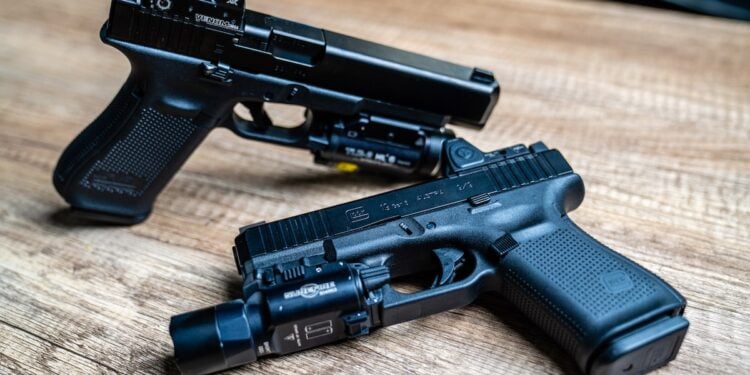 Want to get a pistol light? It makes a huge amount of sense as target identification is important and you don’t know when or where an attack will come; you may need to have a light source.

But…how to choose one? There are so many!

For starters, you probably don’t want to get some Chinesium budget special by sorting by price on Amazon or getting the one that looks the coolest from Wish.com. Also, as the title mentions, the TLR-1 is not always the best choice. In fact, the TLR-1, by and large, the most popular make/model of pistol light, might actually be a terrible choice.

So, how do you get a light that’s actually worth a darn? What should you look for?

Instead of combing the internet for makes and models that might be good, here is a list of attributes that you want to look for when selecting a weapon light. Ultimately, you need to make the best decision for you, but the better-suited a light is for your purposes, the better the results will be.

Get A Switch Design That Facilitates Easy Operation

The switch design makes a huge impact, as you need to be able to easily activate or deactivate the light quickly and easily. It should also be such that the light isn’t easily activated inadvertently by bumping into anything.

What you’re looking for is the most efficient actuation possible. Having to rotate a tiny switch, which is definitely a fine motor skill, and under stress…may be less tenable than one might think.

The aforementioned TLR-1? Rear-mounted switch that you have to rotate down, and requires a good amount of pressure to turn completely on.

Personally, I prefer a rear-mounted switch that I have to push in with my fingertip. This leaves my trigger finger extended and still outside the trigger guard when I activate it. You, however, might discover a different preference.

The Switch Should Be Within Reach Of The Trigger Finger 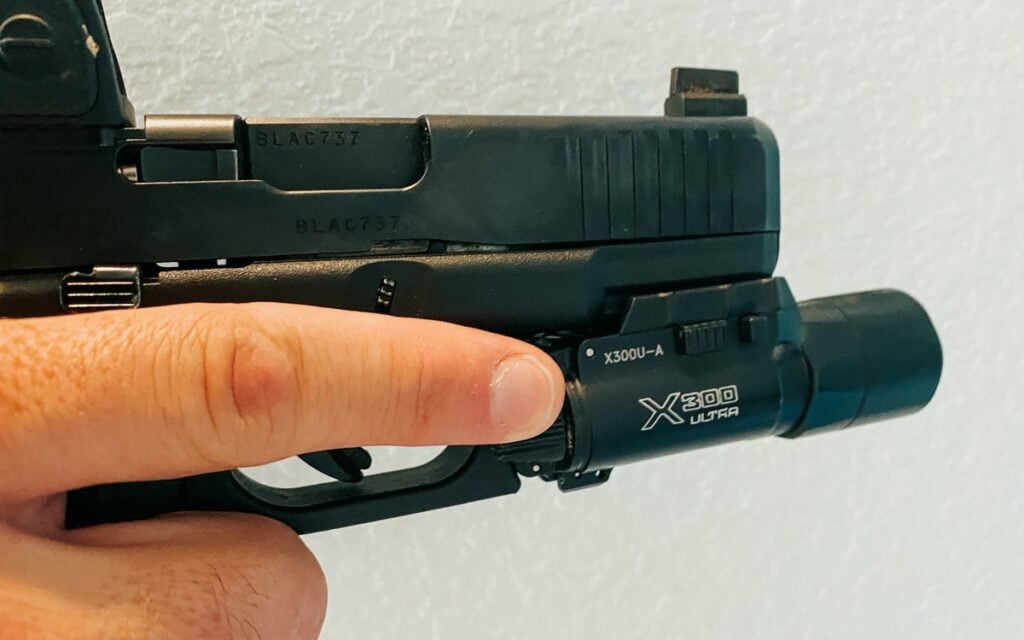 Here we have an aspect that can be overlooked. When choosing a pistol light, you should be able to reach the controls with your trigger finger.

Be aware that you might not be able to get the two-handed shooting grip you typically use in a fight. It’s often the case that a person is fending their attacker off with their non-dominant hand.

Therefore, you need to be able to operate the light with the shooting hand with the gun in your hand.

Try this before putting on your pistol light. Grasp your pistol and see how far your trigger finger can reach. Can you touch the front of the trigger guard? If so, you can add…pretty much any light. If not, you need to find a light that is within easy reach of the shooting hand index finger.

So, if your trigger finger doesn’t quite reach the front of the trigger guard…you need to select a light that has controls that extend far back enough for you to reach them. Or you might need to get a more compact gun so you can run a light if having one is a priority for you.

Editors Note: PHLSTER Holsters makes a product called ARC Enhanced WML Switches which allows you to change out the switches on the Streamlight TLR-1 and Surefire x300U to different lengths and textures. 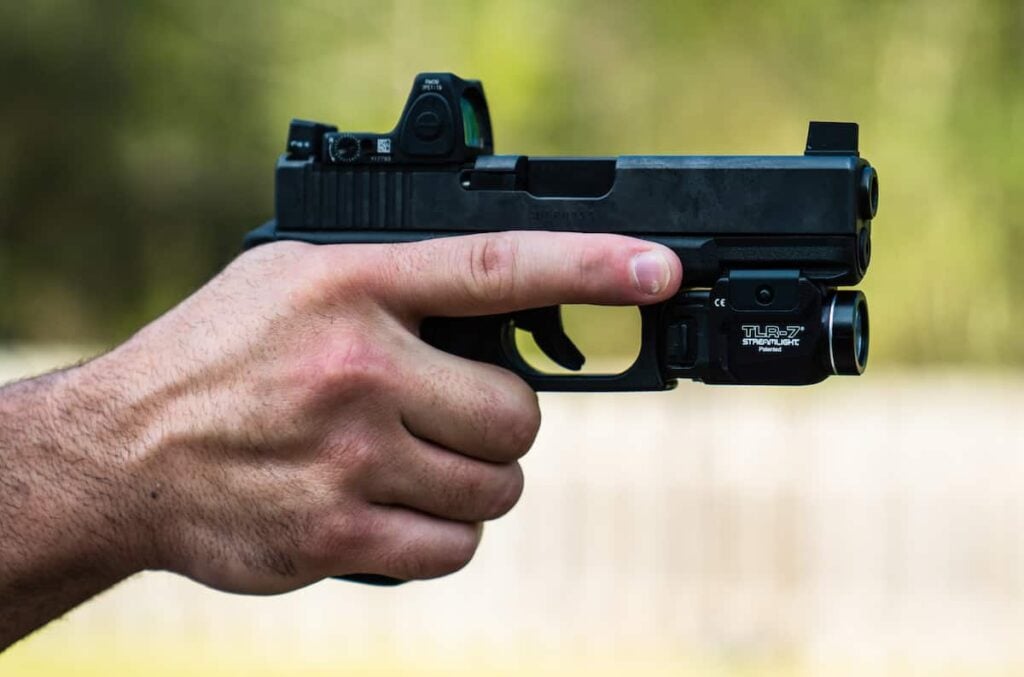 You want the largest amount of both that you can get, so make sure you pay attention to the technical specs of your light.

Granted, you’ll lose a bit of output if you drop a bit in size, though doing so may be necessary, but again, you want to get the greatest amount of light output in the given size of weapon light you can.

You also have to choose a light for your pistol that can be holstered, unless you’re choosing a light for a nightstand gun.

As a general rule – and I know a bit about this, since my day job is working for a holster company – is that the farther the light extends past the frame, the harder it is to make a holster for that gun and light, as there’s less retention force on the gun itself.

Again, that’s as a general rule; there are plenty of exceptions.

It’s also the case that most holster companies will probably only support lights and other attachments from major manufacturers. So, a light from, say, Streamlight, Olight, Nightstick, or Surefire is probably a safe bet. A light from Budget Import Tactical on Amazon? Not so much!