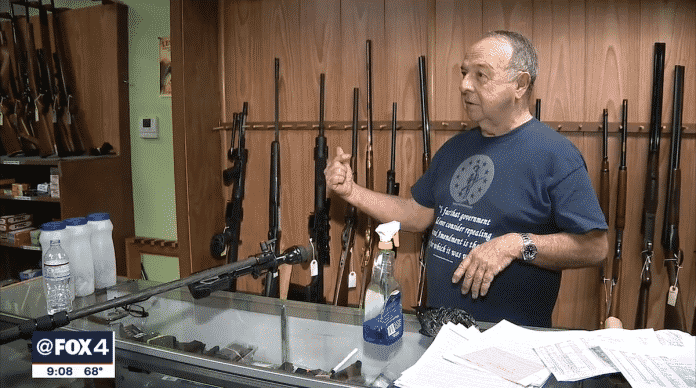 A 77-year-old gun shop owner, who runs his store by himself, was the victim of an armed robbery. A group of masked men (masked required by covid order) entered the store and briefly pretended to be shoppers but soon drew their guns and forced the owner to the floor behind his counter.

With guns to the back of the owner’s head, they bagged and stole at least 50 guns. During this time, the owner faked a heart problem.

“I’ve got a heart medication and I’ve got to get to my pills,” he said.

By the time the owner was able to get his gun, the robbers were leaving the store, so he said that he pointed it at the only one left in the store.

He shot the suspect in the shoulder and fell outside as his accomplices drove away. Police took him into custody and to a hospital.

ATF later said that they believe this store was targeted because the owner works alone and does not have surveillance cameras.

Notice that it appears that this shop owner didn’t have his gun on him. Not that it might have been much help given he was one against several armed men. Maybe not having access to it actually saved his life??

The biggest takeaway from this one is that he shot one of the robbers as they were leaving the store. Yes, the last robber had a gun in his hand, which means he was a deadly force threat, but attempting to engage armed robbers as they are leaving is entering into a fight that wasn’t necessary to protect his life.

I imagine that the ATF is grateful to have a suspect to question, but if this were not a gun store robbery, could this shop owner possibly face charges? If the immediate threat is passed and the threat(s) are leaving, then the imminence window is closed, and deadly force is no longer justified. And, unfortunately, there is no video to back up this shop owner’s claims.

Again, I can’t see this victim having any legal issues, but please let them go when the bad guys are on their way out the door. Be safe, be a good witness, and let the police do the police work.