Shooting challenging drills is an essential part of recognizing where we need to improve. The iHack will push most to the limit. 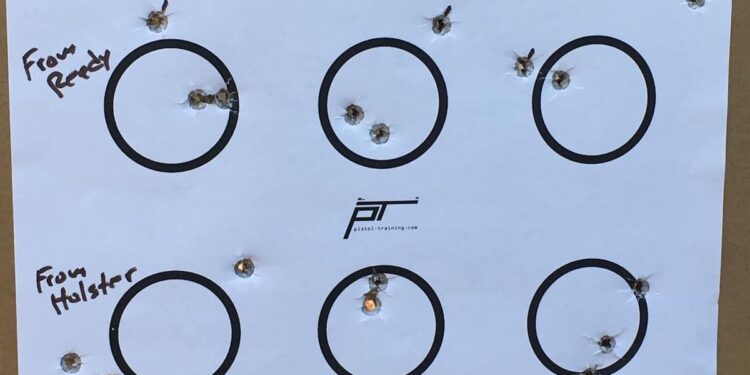 Ken Hackathorn is one of the godfathers of modern firearms training. If you take shooting seriously, you should know his name, and be paying attention to what he says. Ken has a set of standards, called the 3-second Hackathorn Headshot Standards. In its original guise, the drill calls for three separate targets, set 2 feet apart from each other. The shooter draws and engages the targets as appropriate within the PAR time. It is a fun drill if you get to shoot on ranges that allow multiple targets and drawing from the holster.

The reality for some of us though is that we do not have regular access to that sort of range, if at all. What do we do then? The late Todd Green understood this, and he adapted the Hackathorn Headshot Standards to an indoor range friendly version and called it the iHack.

The iHack calls for three separate strings of fire, engaging three 2″ circles with one round each, with a 3 second PAR. The order changes for each iteration. On the first string, the targets are engaged from left to right. String two is from right to left. The third and final string starts with the center target, then pick up the other two in whatever order is preferred. It is a very straightforward drill, and only requires nine rounds, but the difficulty level is pretty well up there. In order to “pass” the drill, all shots must be fired within the PAR time, with seven hits out of nine shots fired. Of course, for some of us that is never good enough, we want all hits.

While the drill is simple, pulling off a clean run is really a challenge. It combines two things that people typically think of working against each other, a higher level accuracy standard, and going fast. It throws the whole “balance of speed and precision” paradigm out the window and demands shooters both go fast and shoot accurately, all at the same time. It is a real eye-opener for people (like myself), who think they are decent shooters, and is good at putting people back where they belong.

My stumbling point tends to be a lack of patience and feeling the time pressure a bit too much. I can hit 2″ circles at 5 yards all day long without time constraints, but force me to do it quickly, and I fall to pieces. In a perfect world, I think the draw to first shot would happen around 1.75 seconds, and each succeeding shot would happen at 0.50-0.60 intervals or splits. The half-second splits I believe to be quite doable, but a 1.75-second draw to a 2″ circle at 5 yards is really a push.

Fortunately for guys like me, the easy version and coincidentally more indoor range friendly version is shot from the ready position. That makes the first shot easier, but somehow I still manage to screw it up. Any ready position will do, just don’t have the gun pointed at the target. I tend to use muzzle elevated compressed ready position, which is probably where I make myself fail. Other ready positions may be a bit quicker.

The iHack drill isn’t a drill for the novice shooter. It will likely challenge even the best among us if shot from concealment. From a ready position, it is still a very difficult drill, but certainly more achievable. If you aren’t quite to the point you can pass this drill (like me, still), keep after it. Someday, maybe even before me, you will be able to pass it. Being challenged and pushing our skill level by shooting drills just outside of our reach is what helps to push us forward. If you decide to take a swing at it, be sure to let us know how you do in the comments.