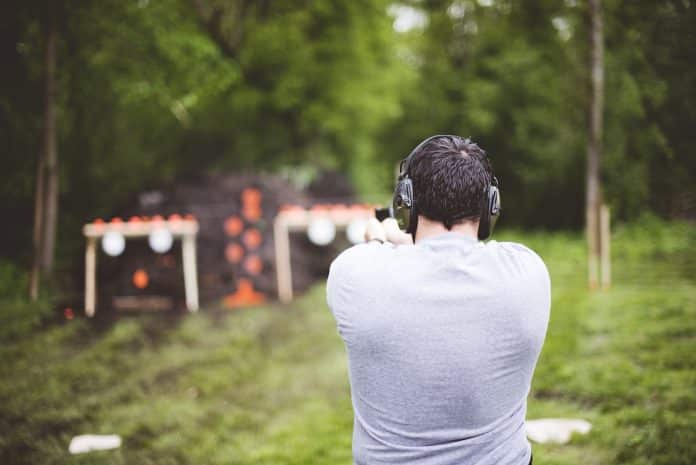 Have you ever stepped off the distance from one end of an aisle to the other end at your favorite grocery store? Have you ever given much thought to being in public and not right next to your family members? Just recently at a local pizza joint, I was sitting at the table conversing with other family members while my kids were across the restaurant in the game room, which I could see to watch them, but certainly was not right next to them. What if something goes horribly wrong in those moments when we are separated from family, and they are in danger of being harmed or killed because of their proximity to the bad actor? Do I have the requisite skill and knowledge of my tools (i.e. a handgun) to solve problems at those distances? What are those distances?

Rarely do people think about “zeroing” iron sighted handguns. Maybe because most people don’t shoot quite well enough to pull it off. Or maybe because people don’t realize the true potential of a pistol and what demands a situation might place on them. Let’s be honest, most people treat guns like talismans. Whatever the case, we should really be zeroing our pistols, or perhaps more accurately, know our hold overs or unders.

Guns typically come from the manufacturer with one of three intended sight setups. I say intended because sometimes the reality can be a little different than what is intended. The three options are usually a “driving the dot” sight picture, a 6 o’clock hold, or top of front sight.

The “drive the dot” setup is sometimes called a “combat” sight picture. The sights are set up so that bullets impact where the dot is on the front sight. This means we should be covering up what we are shooting at with the front sight post. In my experience, this type of setup works well inside of 15-ish yards but becomes problematic as distances increase. Especially if the target is small enough to not be seen at all behind the front sight (i.e. the bullseye on a B-8 target).

The 6 o’clock hold is generally considered a bullseye sight setup. It is intended to allow for very precise alignment and placement of the sights on the target, usually about 3”-4” below the point of impact at 25 yards. When shooting at known distances, if a person knows the appropriate hold under, this sight set up will allow for a very high level of precision. It allows the shooter to see what they are shooting at the whole time. Where problems crop up is when the distances are not exactly known, and perhaps there is not a high contrast target where it is easy for the shooter to have an appropriate reference point on the target for a hold under. In defensive type shooting, there usually are not many good reference points on the target.

The final option is where the bullet hits on the top edge of the front sight. In my opinion, this is the best option. It allows for me to still see the target, or at least half of it, and since I can see my front sight, I can know exactly where the bullet will impact (at least if I do it correctly).

There are things that can affect how all this works out. The type of ammunition used will matter. Bullet weight can change the point of impact for a bullet. Especially as we start to stretch the range a bit. Some guns will shoot specific brands of ammunition differently than others as well. I have seen guns that will shoot certain brands slightly left or right. Change the ammunition and the gun shoots dead center, even though the bullet weight is the same. I have also seen guns that have a clear preference for a certain brand and/or grain weight of ammunition. Usually, not the cheap stuff. The cheap stuff might be okay for blasting targets at closer ranges, but when accuracy matters, we need the accuracy.

How do we do this?

So how do we “zero” our handguns? I put that in quotations because sometimes there isn’t the adjustment we need and it is more about just learning the sights. I recently went through this with a handgun that I had. First step, we need to pick what ammunition we want to use for this process. At minimum, we need to know how our chosen carry ammo shoots. If we want to go a step further, we can try to find a lower cost round that matches our carry ammunition for practice.

After we have chosen our ammunition, we need to choose our distance. Not all manufacturers “zero” to the same distance. Some do 25 yards, other 15 yards, who knows. Pick a distance that matters to you. What do you think a handgun should be capable of? This becomes a critical criteria when determining if a certain handgun is worthy of being carried seriously. Can we do with the gun what we think we need to be able to do with it?

Next, it is time to start shooting. If we are good enough, we can do this part without using a rest. If our shooting skill isn’t quite up to the task of shooting good groups at the chosen distance, we may need to use a rest. Groups should usually be at least 5 rounds. This helps mitigate just getting lucky three times in a row and the data being misleading. The larger the data set, usually the more accurate the data. Usually.

After we have our hold overs/unders figured out, it is time to start practicing. Our eyes and brain will become accustomed to seeing the sights a certain way. We need to make sure that how we see and process the sights is the same across the board. That means putting in reps and teaching ourselves what we need to see. It is also usually a good idea to shoot from other distances and pay attention to any variance in the point of aim and point of impact. Sometimes there are no short cuts and the work just has to be done. Think about what you believe a handgun should be able to do, and see you on the range.