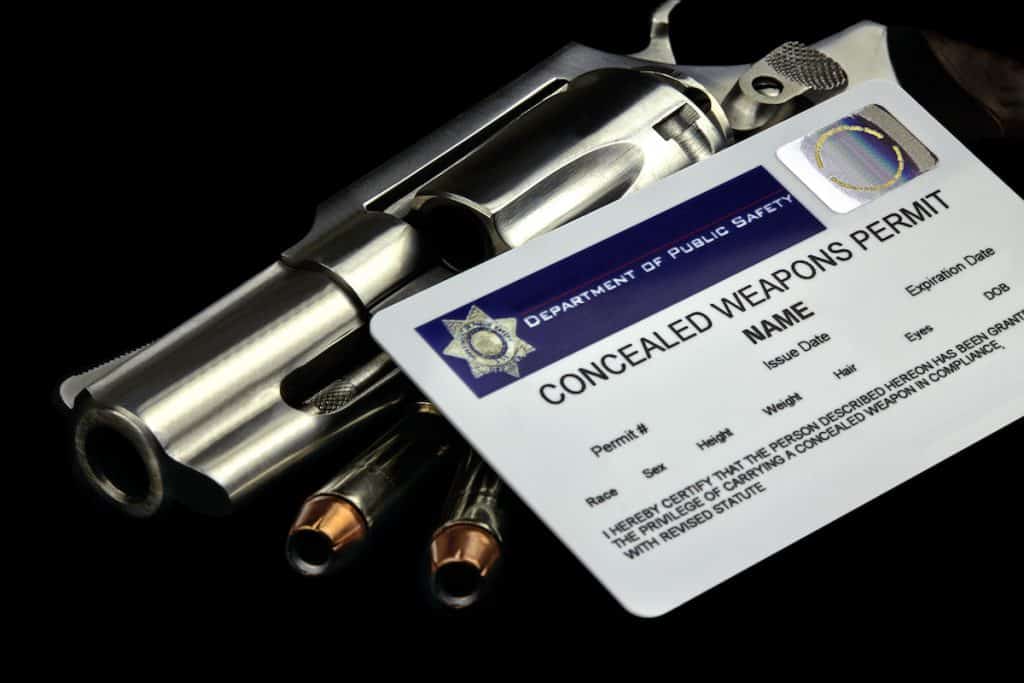 I live in a state that just recently switched over to constitutional carry. Before that, you had to talk to your police chief to get a permit. The police, in this state, are thankfully pretty good about giving the benefit of the doubt when they see a handgun print on a belt line but I’ll share a story of when having my concealed carry permit came in handy.

Long ways back, I had just broken up with my girlfriend. It was one of those long summer relationships that faded away with the warm weather. I was more than a little stuck in my head. One overcast day, I decided to walk along the beach and let my thoughts drift. It was October, and the beach was all but abandoned except a few stray runners with their shaggy beach dogs.

At that time, I carried a Glock 19 in an inside the waistband holster. It didn’t print too badly – especially with a flannel over the top. With the beach breeze pushing in, my right side had a noticeable outline. Where I live, it’s not too much of a deal. As the morning drifted into the afternoon and the afternoon into early evening, I realized I had damn near walked down to the border of Massachusetts. Realizing I was somewhere hovering around the border, I wisely decided to head back to friendly territory.

Unfortunately, on my way back, I think a senior woman called the police.

In New Hampshire, before constitutional carry, you can carry a concealed handgun so long as it is unloaded. That said, I had a permit.

A Seabrook police officer rolled up on his four-wheeler and pulled up alongside me. At the time, I was under no suspicion that I did anything wrong or even potentially illegal, so I regarded him much in the way anyone would when they see a police four wheeler rolling down the sands.

They do have sweet four-wheelers. A bit jealous, really.

When he stopped by me, I waved. He motioned me to come over, and I did.

“Where is it located?”

I didn’t grab it but just told him where it was.

“Do you have a pistol, revolver license?”

“Where is it located?”

“In my wallet in my back pocket.”

“Could you get it out for me?”

I slowly pulled out my wallet and leafed through to where my permit was located. The officer didn’t even ask to see my driver’s license but, in hindsight now, I feel like he was just checking off the boxes regarding determining whether or not the complaint was at all valid.

He examined my pistol/revolver license, saw it wasn’t expired.

“You mind me asking what you’re doing out here today?”

The air had a slight chill and bite to it. It was an overcast, glum day for sure. He looked me over and then handed the license back. I felt out of place in this interaction. I didn’t understand why I was being stopped and, more importantly, why, on an empty beach, I was being asked by a police officer whether or not I had a permit.

“Sir, if you don’t mind me asking,” I jumped in. “What was the reason you stopped me?”

The Seabrook police officer seemed a bit annoyed more than anything by the question — but it’s hard to tell whether that’s just general annoyance or pointed. He didn’t even turn around when he said, “someone called in and said that maybe there was a man with a gun on the beach.”

“Did you tell that person that we’re allowed to carry?”

He shot me a look that gave me the impression he wanted to waste not even a second more of his time with me, this beach, or this complaint.

“Have a good day, sir,” I said as he drove off across the sand.

Now, some beaches in New Hampshire pointedly prohibit carrying firearms. There are also private beaches. It just so happened I was on neither. And this is an example of why it was a good idea to carry my permit on me — even though I did nothing wrong.

I keep mine in my wallet with my license and Social Security card.Of course, I always have my gun with men as well.

I agree with Gloomsinger, my permit and drivers license are always with me when out of my house whether I have my gun with me or not. I do this to ensure I have my permit when I am carrying which is most of the time.

It’s also another official form of ID, just like your license. I’ve had to have more than one form of identification for things before.

Was your girlfriend hot?

In this state, you darn well better have your permit with you if you’re carrying your firearm. I thought the article would be about why you should carry the permit even if you aren’t carrying.

I actually had the same thought you did.

I got checked outside my local library. I was on my way home from the range and got to the library 15 minutes before it opened. While waiting, I reloaded my carry gun with defense ammo and repacked my range bag. When I came back out of the library about half an hour later there were to local police cars there, one parked behind my car. They asked if I had guns and ammo, and I told them I was on my way home from the range. One officer asked if I was carrying, and then what I was carrying. I told them, showed my permit. no problem. Somebody had seen me reorganizing my range bag, had panicked, and called the cops. I laugh about it now, how a barely 5 foot tall, little old lady was suspected of being a terrorist.

In my state, if you carry and have a permit, you need to have it on you. While constitutional carry, there is a difference RE having a license or not and where you go. With a license, I can go some places armed that an unlicensed person cannot.

Whats the issue? In every state I have lived in (had permits in each) it is mandatory that you have your permit on your person whenever you carry. The only states that I can find where this is not the case is the constitutional carry states. Now it could be a little sticky if I were traveling in a permit state from a constitional carry state and being asked for my permit.

If stopped I get my permit out with my Drivers License and proof of insurance.

GOOD habit, I was told by my Instructor (a current Police Officer), they SHOULD know you are a REGISTERED carry when they run your plates if in a car. DO NOT…. EVER make sudden moves, always MOLASSES.

Sound advice. LEOs want to go home after their shift too.

Only if I’m carrying and he asks.

In some states it’s illegal NOT to tell them. And in other states, your carry permit will show up as soon as he runs your DL. Why not just be up front and let the LEO know you’re a responsible gun owner and carrier?

I realize that and I know the laws of my states and would in any state I would travel armed. If I am not carrying, I don’t have to show a license and might open me up to more problems than it’s worth. I am only under obligation in my state to tell a cop if he or she asks. Further, you don’t know what you’re going to get. Saying I should be honest because I am not doing something wrong has led to many problems and even death. I have nothing to prove to anyone either. Unless I am obligated, I won’t. The other thing is that I live around reservations. Don’t get caught carrying there. Showing them a license when not carrying will open one up to a search. Again, why do it if it’s not necessary. People that presuppose innocence RE government authority miss the idea of subjective interpretation and action.

It doesn’t put any “more” to have it on me, I take my wallet anytime I go anywhere off my property.It can be a bit aggravating, but what the hell, I’m of the view “BETTER SAFE THAN SORRY”, so I have it on me ALWAYS.

It’s called a police state and anyone with the firepower to match theirs is deemed suspect enough to investigate. They don’t give a fuck this is USA and we have the Bill of Rights, otherwise they’d instruct dispatchers to ignore “man/woman with gun” if there is no crime being committed.