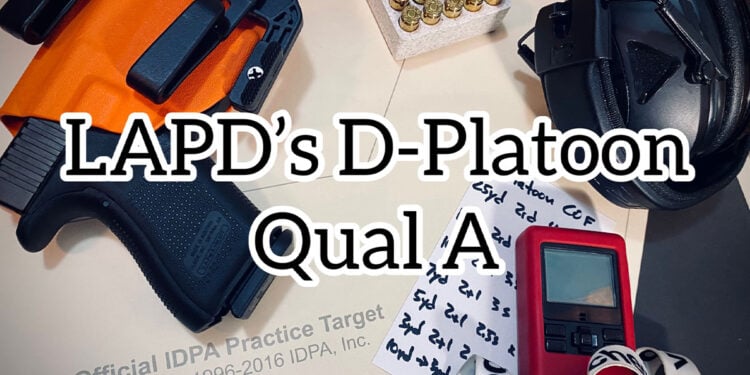 Hopefully, by now, you have listened to Darryl Bolke’s interview on the USA Carry YouTube channel. Darryl is one of the hidden treasures in the firearms training world. He doesn’t teach as many classes as others on the “national circuit,” but the value of his message is just as high as others. He emphasizes skill sets that go beyond the technical shooting skill lane occupied by many instructors. If you haven’t listened to the interview, you really should.

This course of fire comes from Darryl via pistol-forum.com, where I first saw it posted. It is a version of one of the handgun qualifications used by LAPD’s D-Platoon (aka LAPD SWAT) in the past. I am unsure if it is still used or not.

The target requires an 8” circle for the body and a 3”x5” box for the head. There are quite a few targets that would meet these criteria, but I used an IDPA target without a 3”x5” index card for the head because I didn’t have any in my range bag on this trip. Fortunately for me, a 4” circle is about 17% smaller than a 3”x5” box.  Hits in the -0 are scored as hits, everything else is a miss. There are a total of 50 rounds fired for the full course of fire. There are two strings of fire that require quite a bit of movement, so if your range cannot accommodate those strings, it turns into a 36-round course of fire. According to Wayne Dobbs, Darryl’s coconspirator with Hardwired Tactical Shooting, this course of fire is meant to be shot from a traditional low-ready position.

Shot using an IDPA target or similar, it is simple hit-or-miss scoring. Inside the 8” circle or 3”x5” head box is a hit. Everything else is a miss. Hits are worth 10 points, misses are worth 0 points. Shots over time are worth 0 points (make sure to account for them on the target, or just subtract 10 points when scored up). There is another way to shoot this course of fire with a B-8 repair center replacing the 8” circle for the body. If you go that route, it is scored actual point value on the B-8 for the body shots. Hits in the 10 ring are worth 10 points, 9 ring 9 points, etc. A 90% score is a good benchmark or goal to work towards.

This one is a rascal and will sneak up on you. It looks relatively straightforward on paper, but the time constraints are teetering on that edge of pushing too hard and just hoping for good hits, and so slow that it isn’t really a challenge. There is just enough time to get the work done well and actually know what you are doing. It allows the shooter to shoot at “assessment speed,” as Darryl calls it.

I shot the course of fire once, each with both scoring methods, except I used an FBI IP 1 target for the bullseye because I didn’t have any B-8s. Shooting it with a bullseye for the body shots ups the accuracy requirement just a bit, and makes it more difficult to ace. 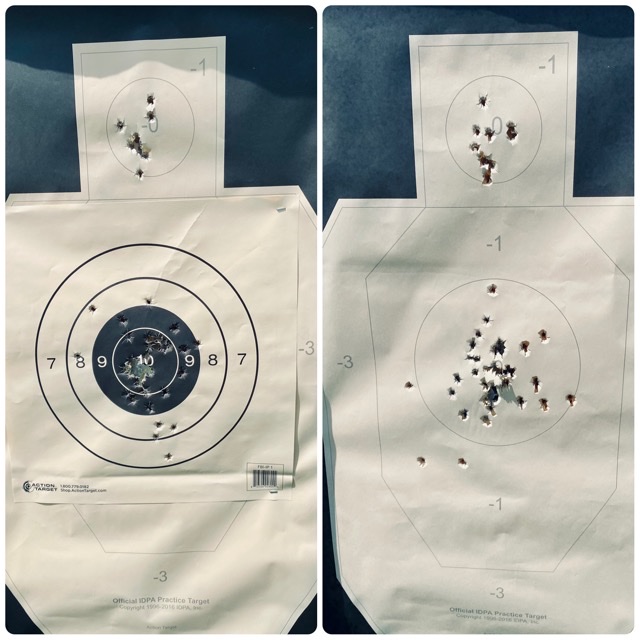 For me personally, the two most difficult strings of fire are the movement strings. Shooting on the move is not something I spend much time working on, though, so for other people, the perception of difficulty may be a little different.

This course of fire can be shot with nearly any handgun, even some of the really small semi-autos that people commonly carry these days. If we drop the movement strings, it can literally be shot with any handgun because there is not a single string of fire over 3 rounds. If you give it a try, drop your thoughts in the comments.